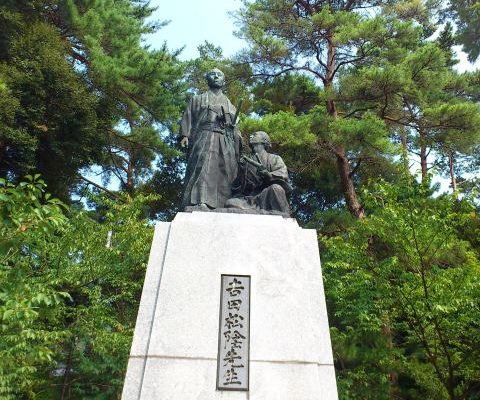 Last year marked the 150th anniversary of the Meiji Restoration (明治維新 or Meiji Renewal in Japanese), dated from the proclamation of the restoration of political power to the emperor on 3 January 1868.

So, for my blogs in 2018, I decided to introduce some of the Japanese men and women who are the subject of my draft manuscript for The Meiji Miracle, people who helped bring about the Restoration and shape the era known as Meiji, which lasted until the emperor’s death in 1968.

Unfortunately, my project went the way of many good intentions, and only a few blogs got written. Never mind, there is always another year, and so much happened in the Meiji period (1868-1912) that for the next 44 years there’ll be some kind of ‘Meiji 150’ anniversary every year. It takes determination to travel to Hagi in Yamaguchi prefecture. You can’t just jump on the bullet train in Tokyo, and hop off again a few hours later, for the former castle town lies on the ‘ura’ or ‘back’ side of Japan, on the coast of the Sea of Japan. Unlike the regions along the Pacific coast to the east, the Western regions have a harsher climate, have not been developed as rapidly as the Eastern regions, and, are still relatively isolated, especially in the south-west of Honshû, serviced by infrequent local trains and busses. Nor is Hagi a large town. Although it seemed bigger and busier to me when I visited it this summer than when I first saw it in 1984, its population has actually been shrinking steadily for decades (49,560 in 2015). Anyway, now, as then, the central parts of the town can easily be explored by bicycle in a day or two. Worth exploring Hagi certainly is: the town boasts no less than four World Heritage sites – five, if you count the Ohitayama Tatara Iron Works, 23 km north of the city centre. They represent part of the 23 sites across 8 prefectures and 11 cities which collectively were registered as ‘Sites of Japan’s Meiji Industrial Revolution’. The other four are: the Hagi Reverberatory Furnace; Ebisugahana Shipyard; Hagi Castle Town, with the castle ruins, the former Upper-class Samurai and Merchant Class districts, and – somewhat surprisingly – the building of a small private school.

This is the ‘Shôka sonjuku’ 松下村塾or the ‘Village School Under the Pine Tree’, Japan’s most famous school. In its early days it was not much different from so many other small private schools in castle towns or villages all over the country, where a scholar taught the sons of local samurai in the Confucian classics.

So how did this unlikely candidate for designation as a piece industrial heritage nevertheless make the UNESCO list?

Well, it would probably never have happened, had not Yoshida Torajirô, known to posterity as Yoshida Shôin 吉田松陰 , taken over the school from his uncle in 1857. He had a criminal record and only two years to live, but during this time he taught and inspired many future leaders of Meiji Japan, including two future prime ministers, Itô Hirobumi 伊藤博文and Yamagata Aritomo 山縣有朋. But first things first. Shôin, as we will call him by his literary name, was born in 1830 in Matsumoto, near the castle town of Hagi in the domain of Chôshû. Although a samurai, Shôin’s father worked as a farmer. Like others of his rank, he could not afford to live on his rice stipend alone. Still, Shôin had to study hard, even while helping in the fields, for he would succeed his uncle Daisuke as teacher of military strategy at the domain’s school (most domains had such a school to educate the lord’s vassals). Daisuke died young, and in 1839, at only nine years of age and himself still a student, Shôin had to shoulder teaching duties: he became a regular teacher at eighteen.

His fame as a teacher, however, came later. Meanwhile, Shôin, in order to learn more himself, travelled around the country. He set off south for Kyushu in 1850, where he deepened his knowledge of military strategy and explored a Dutch ship in Nagasaki, Japan’s window to the West. In an age when travel was restricted, study tours offered one of the limited opportunities to leave one’s home domain. In the following year Shôin accompanied his lord to Edo, where he met many famous teachers of his day, including Sakuma Shôzan 佐久間象山, a noted advocate of opening Japan in order to learn from the West. Then Shôin travelled north, this time without waiting for official permission from his lord. In Mito he heard lectures by famous scholars of the ‘Mito school’, advocating renewed loyalty to the emperor and a firm stance against the foreign Barbarians. He continued right up to the northernmost part of Honshû, where he observed foreign ships sailing through the narrow straits between Honshû and Hokkaidô without paying the slightest attention to the Japanese authorities.

When he returned to Edo after four months, his lord deprived him of his samurai stipend and title and sent him home to Hagi as a punishment for travelling without permission. But at the same time, he showed sympathy towards his retainer and even granted him support for further travels. Shôin returned to Edo, reaching the capital in July 1853, just days before one of the most dramatic events of Japan’s modern history.