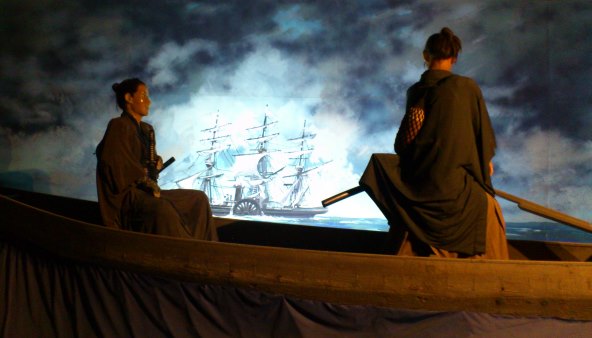 On 8 July 1853 a frightening sight met the eyes of the people of Shimoda village, at the entrance into the bays of Sagami and Tokyo. Far out at sea, several ships seemed to be on fire. Moreover, they were coming closer. The fire, it turned out, was just smoke coming from their funnels. The excited onlookers realized that they were seeing Barbarian ships. Panic befell them; news was sent to the local governors and the Shogun, and the inhabitants of Edo and the surrounding villages prepared to flee before the expected invasion. The military invasion never occurred, but the people felt rightly that they were witnessing a momentous event.

The fleet was commanded by Commodore Perry, who brought a letter from the American President, Filmore, to the Shogun. He delivered the letter in an elaborate ceremony after marching ashore at the head of 300 armed men, while his ships’ canons aimed towards the beach. Having completed his errand, Perry did not hang around. Announcing that he would be back the following year to receive the Shogun’s answer, he left. By 17 July was well on his way to Shanghai.

Perry’s arrival plunged the shogunate into confusion. Although the most determined, he was not the first foreign captain to demand that Japan enter into trade negotiations. Challenging the shogunate’s seclusion policy, they attacked a cornerstone of its legitimate existence. The first Tokugawa shoguns in the early seventeenth century did everything to secure peace and stability in war-torn Japan. Together with a political structure with elaborate checks and balances and strict class divisions, the seclusion policy helped ensure that no military leader gained enough power to threaten the Tokugawa hegemony. By 1853, however, the shogunate’s political superiority was threatened by both a mounting internal crisis and the increasing foreign encroachment.

The combined domestic and foreign crisis preoccupied Yoshida Shôin. A voracious reader and keen observer, wrote a diary during his travels; in countless discussions with the men he met, he formed his own opinions on Japan’s crisis and necessary remedies. He submitted memorials to his lord proposing reforms. Japan, he argued, needed a central government which would follow the guidance of the emperor, with officials selected according to their merit rather than their rank. The government should fight foreign intrusion, but send young men abroad to study in the West.

On 9 July Yoshida Shôin, having travelled to Edo again, paid a call to his teacher Sakuma Shôzan, only to find him absent. To his astonishment he heard that Shôzan with a few students had left for Uraga to look at Perry’s ships. Shôin hastened to see for himself. The men remained in Uraga for most of the time Perry did. They continued to discuss the significance of this foreign intrusion for weeks. Like his teacher, Shôin believed that Japan could not afford to stay in ignorance of the outside world. Together they made plans for Shôin to travel and observe Western countries first hand.

Perry, as good as his word, returned in March 1854 and forced the shogunate to conclude the Treaty of Kanagawa on 31 March. The treaty stipulated that the ports of Shimoda and Hakodate would be opened to American ships and that consuls would be exchanged, who would negotiate a treaty of trade and commerce. Thus ended 200 years of isolation. Moreover, the shogunate’s inability to preserve Japan from this foreign intrusion ultimately led to its downfall. While Perry anchored in the bay of Tokyo for the second time, a young Japanese man and his companion rowed out to his ships and asked to be taken on board. They told Perry’s interpreter that they wished to travel to America. Carrying a farewell poem from his teacher and a supply of paper and brushes for taking notes, Shôin together with his comrade Kaneko Shigenosuke, who also came from Chôshû domain, had braved the choppy springtime sea in a fisherman’s boat. The two men risked their lives life that night early in 1854 when they approached Perry’s ship, for leaving Japan was an offence punishable by death since the seclusion edict of 1639. Perry, however, although impressed by the two men’s obvious good education and manners as well as their determination, refused to let them stay on board and had them rowed back to the shore. A few days later some of his officers happened to pass the cage-like cells of the local prison and spotted the two men.

Shôin’s travels which had taken him all over Japan, from Nagasaki in the south to Tappizaki in the north, and down into the gold mines of Sado Island off the West coast, had come to an end. The remaining journeys of his life he would make as a prisoner in a portable cage, first to Edo, where he spent several months in a cell. In an adjoining cell sat his teacher Shôzan, implicated by the discovery of his poem among Shôin’s effects. They escaped the death sentence, but the authorities of Shôin’s home domain sent him and Kaneko to Hagi and imprisoned him for fourteen months. Kaneko did not survive the ordeal.

While imprisoned in Hagi, Shôin deepened his learning, reading about forty books a month, which his brother carried in and out of prison. He also wrote many essays, exchanged writings with other scholars and even lectured to his fellow prisoners.

Once released from prison, Shôin spent the following years under arrest in the home of his uncle, Tamaki Bunnoshin’s family. In 1857 he took over the “Village School Under the Pine Tree” (Shôka sonjuku). His short, but significant career as career as Japan’s most famous private teacher had begun. Room in the family residence where Shôin was confined after 1855

The Meiji Emperor was only sixteen when the Restoration of 1868 ended the rule of the Tokugawa shoguns and established the imperial court as the...read more →