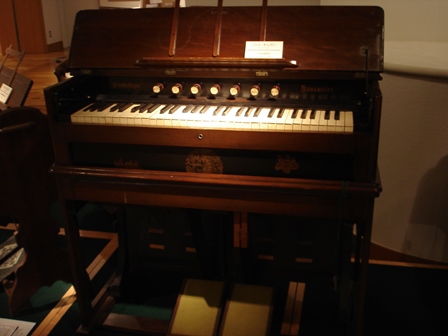 And so, Yamaha and Kawai toiled up and down the mountain roads of Hakone, carrying their masterpiece on a pole. The reactions of the music teachers in Hamamatsu and Shizuoka had shaken Yamaha’s confidence only slightly. Surely, whatever the problem with the reed organ they had built, he would be able to solve it.

Isawa Shûji, president of the Tokyo Academy of Music, received them with interest. He had played a leading role in introducing music lessons in schools and setting up a music research institute with a a teacher training course. The teachers needed suitable musical instruments for teaching in schools, and if they could be produced by Japanese craftsmen in sufficient quantities, they would become affordable. Eagerly, he tried the new organ. His verdict too, however, was damning. At least he could tell Yamaha and Kawai exactly why: “It looks good, but the tuning is wrong, so it is useless.” The tuning! Isawa explained that they could never expect to build is serviceable organ without an understanding of Western musical scale and the principles of temperament. He offered to help by letting them attend classes at the music school. Yamaha, who had experience of playing the samisen, could grasp the significance of what Isawa said. He decided to stay in Tokyo and learn what they needed to know. For a month he sat in the lecture hall in his rough workman’s clothes, taking in all he could and poring over charts and plans every evening. He had neither the money nor the time for more leisurely studies, for in Hamamatsu Kawai was waiting impatiently.

In November 1887 Yamaha returned, and together they got going on a second attempt. Kawai had to persuade his wife to borrow money from her relatives, as they had run out of funds. This time Isawa gave his blessing: ‘This can adequately replace the imported ones.’ He introduced to them the owner of a shop on the Ginza, the famous street in Tokyo, lined with Western-style buildings. The shop handled musical instruments and teaching materials in Tokyo and the northern region, and its owner introduced them to another which did the same for the Kansai region. Their distribution network assured, Yamaha set up a workshop in a disused Temple, employed a few workmen and started producing organs to sell to schools. 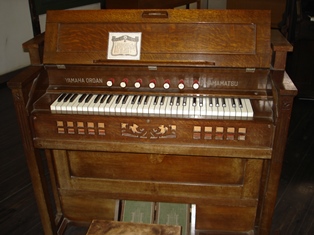 Yamaha kept a tight rein on his small band of workers. He knew he could not rest, for he had rivals. Nevertheless, having identified an expanding market in the public education system and secured the support of the most important man in music education, Yamaha had good reason to expect success. Over the next few years Yamaha’s production expanded continually, he increased the number of workers and moved his workshop to larger premises several times.

In 1890, he entered an organ and a piano at the National Exhibition in Ueno and received high commendations. He made good use of his prizes when he advertised. 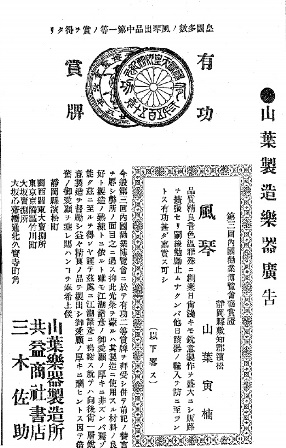 Advertisement in The Musical Magazine, showing off the latest exhibition prize. The Magazine, founded in 1890 carried regular ads for Yamaha’s instruments.

Unfortunately, his firm, by now a joint stock company called Yamaha organ makers, ran into difficulties, when some of the investors wanted their money back. The people of Hamamatsu still looked at the man from Wakayama as an outsider, whom they distrusted. But Yamaha persevered, albeit on a smaller scale. He won another exhibition prize, produced 500 to 700 organs per year, and in 1893 fulfilled his first export order, shipping 78 organs to Southeast Asia. In 1897 he established a new joint stock company, Nippon Gakki Co., with himself as the president and Kawai Kisaburô as his key manager.

Meanwhile, his eyes ever on new opportunities, Yamaha worked towards making the first all-Japanese piano. He had presented pianos at the Ueno exhibitions, but they only had a Japanese case; the actual piano mechanism was imported. The mechanics of the piano are more complicated than those of the organ; the piano reacts more sensitively to changes in location and climate and requires more maintenance and especially regular tuning. Prices, moreover, were astronomical; at the time of Hamamatsu primary school bought its organ for 45 yen, a piano sold for 1000 yen or more, a sum which would build several houses. A Japanese piano tuner cost two yen or more, a foreign one at least ten. By the early 20th century, mass-produced American pianos brought the prices down to around 300 yen for the very cheapest uprights to 600 yen; still a princely sum at a time when a new primary school teacher could expect a starting salary of 10 to 13 yen per month and even a highly-paid civil servant earned only 50 yen a month. 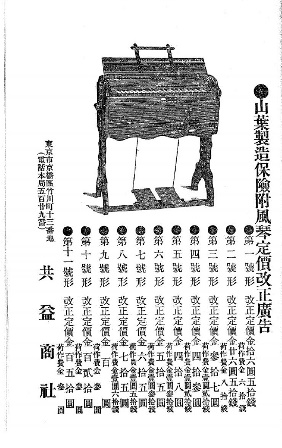 Advertisement for Yamaha’s organs in The Musical Magazine, 1890s: founded in 1890, the magazine carried regular ads for Yamaha’s instruments.

No wonder that Isawa Shûji supported Yamaha in his efforts to build a Japanese piano; Isawa secured him an appointment from the Ministry of Education to travel to America and investigate piano-making. From May to September 1899 Yamaha visited a total of 100 companies, piano and organ makers and dealers, manufacturers of parts, materials and of machines used in production. He purchased 6448 yen’s worth of instruments (pianos and organs) and parts as well as machines and tools, including several iron frames with his name engraved on them.

Back in Japan he set his men to work immediately. Not content with copying foreign instruments, Yamaha wanted to develop his own brand. In 1900 Nippon Gakki Co. made the first piano with a Japanese sound board, and since the sound board is the part of the piano which decides its quality, this is considered Japan’s first domestically manufactured piano. Several other parts came from America; but then, as Yamaha had discovered, even the foreign manufacturers did not make their own hammers or actions (the complicated mechanism which transmits the movement from the key to the hammer), but bought them from specialist manufacturers. Two years later the first grand piano followed and won an exhibition prize.

All the same, production of pianos increased only slowly, and in the first years the sale of organs had to cover the losses in the piano department. Then, at the National Exhibition in Osaka, the emperor himself acquired the piano, and in 1904, a Yamaha piano won a prize at the international exhibition in St Louis. Such recognition, followed by several other foreign prizes and widely advertised, helped to increase sales. Soon the wealthier townspeople began buying their own pianos. 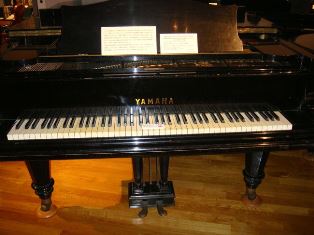 In 1906 Yamaha introduced an apprenticeship system combining practical and general education to secure a trained workforce. A year later, he followed this up with a system of trainees attached to the shops of his distributors to tune and repair the instruments they sold. Meanwhile, his factory employed 800 hands to make reed organs and several hundred pianos, including a few grand pianos. An article in the American Music Trade Review in 1911 stated that Yamaha was producing 600 pianos, 8, 000 harmoniums and 13, 000 violins per year.

Nevertheless, it took quite a while before the Western music trade press began to take Japanese production of musical instruments seriously. An American journal in 1897 asserted: “There is little likelihood that the Japanese will ever become competitors in the piano industry.” Gradually, though, they changed their tune. In 1906, the same journal referred to the possible emergence of “formidable rivals”; Japan’s victory over Russia in 1905 aroused fears of a “yellow peril”. Even so, an English journal still insisted: “No sane European would be likely, except for the novelty of the thing, to purchase an experimental instrument from far off Japan.” Such derogatory comments continued to appear through the next decades. Those, however, who wrote from direct experience showed respect; for example an Australian trader describing in 1939 a visit to Yamaha’s factory, which was ‘so comprehensive as to include every process for the casting of frames onwards’ and the manufacture of ‘accordions, harmoniums and western-style furniture.’[1]

Economic slumps caused only temporary setbacks as Yamaha’s enterprise went from strength to strength. Pianos were produced largely for the home market, which, Yamaha’s company through its engagement in education helped create. But already developments foreshadowed its massive expansion abroad after the Second World War. Just before the First World War, the company had begun to manufacture harmonicas, until then almost exclusive domain of German manufacturers. During the war Yamaha’s company could take over German markets in Japan and Europe.

Yamaha Torakusu died in August 1916, followed two months later by Kawai Kisaburô. That year, Professor Iwamoto Shôji of the Tokyo Academy of Music went on record saying that Japanese pianos hand replaced foreign ones in schools at home and were now exported to China, India, Thailand and Australia, likewise for use in schools.

Hard-working and engaging in new ventures to the end, Yamaha had secured the future of his business soon after his return from America, placing different departments in the hands of younger men, who had apprenticed with him since their teens. One of them, Kawai Koichi, went on to found his own company, Kawai Gakki, in 1927, which became Japan’s second leading piano manufacturer.

After the Second World War, Japan astonished the world when it rapidly developed into a major exporter of pianos. Its total output of less than 10, 000 pianos in 1953 increased tenfold within a decade, and in 1969 Japan became the world’s largest piano manufacturing country with an output of 257, 000 instruments, 35, 000 more even than the United States. Yamaha and Kawai still lead production. Their concert grands are now played by the world’s leading pianists. Westerners had to realize that Japanese pianos no longer fell behind in design, workmanship and quality. Moreover, they had to abandon the misguided belief that mass production by a company that also produced such mundane things as furniture, motorbikes and tennis rackets must necessarily tarnish the quality of musical instruments. Yamaha, unfettered by European musical traditions and therefore not inclined to approach musical instrument making with any kind of piety, treated the manufacture of pianos and organs as a business like any other.