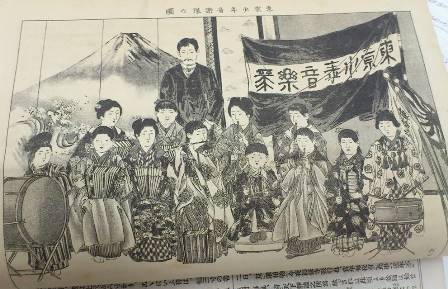 Established in 1895 by Shikama Totsuji 四竈訥治(訥堂、1853 – 1928), this youth band was one of the first of its kind. A few years later several department stores founded youth bands. They performed publicly and were important for making Western music more widely heard. The following year Shikama Totsuji moved back to his native town of Sendai, where he established a similar band. A pioneer of Western music in Japan, Shikama Totsuji also published Japan’s first Music Magazine, Ongaku zasshi  音楽雑誌 (“The Musical Magazine”), which appeared from September 1890 to February 1998.

The kokyû – the Violin’s Forgotten Cousin

In Not by Love Alone I wrote about “the violin’s forgotten cousin” and Japan’s very own bowed instrument; the kokyû 胡弓 (or 日本胡弓). Its origins...read more →