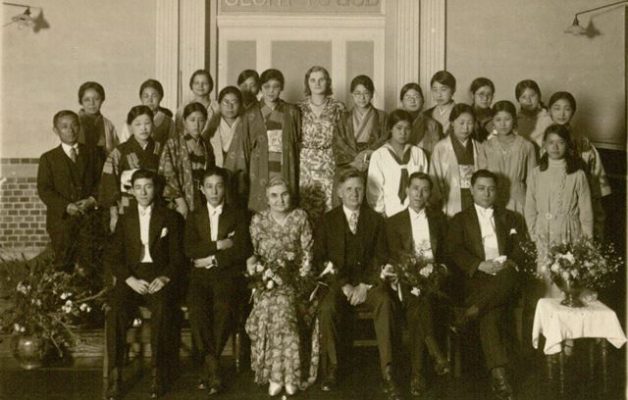 Kate I. Hansen’s work Slesvig was first performed by the Suzuki String Quartet in 1932. How she met them is unclear, but at the time professional string quartets in Japan hardly existed. Suzuki Kikuo, who played second violin, had studied economics at Keiô University, where he had been a member of the University’s music society.

Suzuki Akira, who played the viola, had trained in his father’s business before studying violin with Andô Kô (née Kôda;1878-1963), one of the first violinists in Japan who for many years taught at the Tokyo Academy of Music. In the war years Akira performed in Manchuria, for Mukden Radio broadcasts.

Suzuki Fumio studied cello with Heinrich Werkmeister in Tokyo and with Julius Klengel (1859–1933) in Leipzig. Besides playing in the quartet and teaching, he also played at the lead desk in the Tokyo Symphony Orchestra and composed.

The brothers started rehearsing in Nagoya and occasionally performed on the local radio, but soon they moved to Tokyo, where they gave their first recital on 18 October 1928. A newspaper announced that the sons of the well-known violin maker Masakichi would be playing a Haydn quartet in B major, a minuet by Mozart and a scherzo and quartet in D major by Schubert.

By then Japanese music education was producing enough soloists for the competition to be fierce, but chamber ensembles were still rare. The Suzuki Quartet was one of the first professional string quartets. The brothers performed popular works from the standard repertoire and works arranged for them by Fumio. It made a few recordings, among them Fumio’s Suite, TheTale of Genji for speaker, tenor, soprano and strings. The quartet enjoyed considerable success until it disbanded during the war.

Kate I. Hansen might have met the Suzuki brothers in the resort town Karuizawa, where she and many other foreigners spent their summers and their social life included regular concerts. In a letter dated 23 August 1931, she wrote to her family:

“This Friday evening I had the pleasure of having one movement of my “Schlesvig” played at a concert by the Suzuki String Quartette. They have asked to be allowed to play the whole four movements in public this winter, so I shall get to hear it at last. I put in a couple of hours going over the score yesterday with the manager. They are very clear players, kept absolutely true to pitch, and have had fine musical training. The four of them are brothers, and their father is the largest manufacturer of stringed instruments in the Far East. One of the brothers does good work in composition.”

The Suzuki brothers did indeed perform the entire work, although not until almost a year later, on 11 June 1932, at Miyagi School for Girls (now Miyagi College). Hansen gave a detailed report to for her family the following day:

“This has been a strenuous week-end, but a very happy one, for I’ve had the pleasure of hearing my “Schlesvig” (sic) performed at last – and very well performed -, and of having people seem really to like it and to understand what I was driving at when I wrote it.

The Suzuki Quartet is a unique organization, being composed of four brothers, sons of the pioneer violin-manufacturer in Japan. Their father originally was a manufacturer of samisen and other Japanese instruments. He was the first one, or about the first, to sense the coming popularity of the violin in Japan, and his factory now is a large one, supplying most of the violins in use in this country, and doing a large export business as well. The sons say he has a remarkable ear for music, and can detect variations in pitch that even trained musicians like themselves fail to identify. He is seventy-eight years old, and still manages the factory, working there every day.

These sons range in age from about thirty-five to twenty-five. The elder ones spent from five to seven years each in music schools in Germany. They inherited their father’s ear, and can keep on pitch better than any other Japanese ensemble I have heard. They played one movement of “Schlesvig” in Karuizawa last summer. The present concerts were under our Student Activities’ Association. We had one in the afternoon yesterday for our students and one in the evening for their parents and friends, together with most of the musical people of Sendai. I got the greatest pleasure, I think, out of the rehearsal, in the morning, when I heard “Schlesvig” for the first time – for, of course when I wrote it, I had to depend on my musical imagination as to how it would sound. On the whole, it sounded better than I thought it would! I wish you had been there for the “Christmas” movement, for the second part of it is a set of variations on “Nu har vi Jul igyen.” Curiously enough, most of the evening audience seem to like best the second, and the fourth movements, which are the most complicated. The schoolgirls were enthusiastic over “Christmas”. They made all sorts of fuss over the event, and presented me with a gift and with flowers, surprising me so that I must have been about as awkward as any one could be. (…)

According to a fellow-missionary, “Dr. Hansen received a tremendous ovation, and of course, we were all very proud.”

On 7 June 2018, the work will at last be performed in Denmark for the first time.

Kate I. Hansen’s letters are in the Kate I. Hansen Collection (PP 19) in the Kenneth Spencer Research Library, University of Kansas Libraries (Box 2A, Folder 37 & Folder 38).

For more about the Suzuki Shin’ichi and his father Masakichi, see my book Not by Love Alone: The Violin in Japan, 1850–2010.