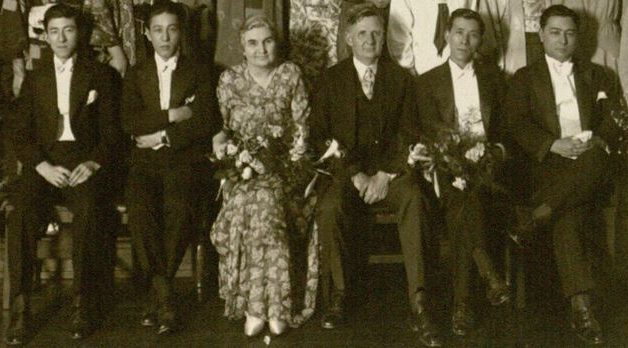 As described in my previous blog, The Suzuki String Quartet and Kate I. Hansen’s Slesvig, the first performance of the entire quartet, Slesvig (or “Schlesvig”, as Hansen spells the title), took place on 11 June 1932, at Miyagi College in Sendai. Hansen had taught at the college since 1907 and by 1932, thanks to her efforts, it had an impressive music department, which Hansen had for several years been referring to as the Conservatory.

Slesvig was the only string quartet performed in its entirety at the concert. The rest of the programme, which is given below, consisted of short pieces and single movements from string quartets:

(a) Peace and Old Wars

(c) Around the Christmas Tree

(d) Andante con moto (From “Death and the Maiden”)    Schubert Front page of the programme Hansen sent to her family, with her transcriptions University Archives, Kenneth Spencer Research Library, University of Kansas)

The ‘Lento’ by Dvorak is almost certainly the slow movement from his famous “American” string quartet. Some of the arrangements, such as the one of Moussorgsky (from Pictures of an Exhibition) my well have been produced by the cellist Suzuki Fumio, who was also a composer.

The programme does not include descriptions of all the works performed, but it does contain extensive notes about Slesvig. We can assume that they come from Kate I. Hansen, even if she did not herself pen the Japanese version. Here is an English translation:

The string quartet composition “Schlesvig” was submitted by the composer as an obligatory requirement and accepted for the degree of doctor of music at Chicago Musical College. The work was in part inspired by the composer Miss Hansen’s wish to commemorate the land of her father’s birth, North Schleswig. Schleswig is a region of Denmark, but in 1864 it was subjugated by Germany, then after many years of resistance it was once again returned to Denmark after the conclusion of the First World War, as a result of the plebiscite stipulated by the Treaty of Versailles.

The first three movements are inspired by the composer’s memories of the time when she visited Schleswig as a child. “Peace and Old Wars” has two musical themes (楽旨). One expresses the deep peace of an old family home in the countryside; the other is a special musical theme of Scandinavia, expressing the way the old people tell the children about the wars of old.

The second movement, “Regrets”, expresses the feelings of a people under foreign rule and has a musical theme expressing deep sadness and another expressing strong defiance.

The third movement expresses family celebrations on Christmas Eve. The first theme: Having returned from church on Christmas eve, the family, young and old alike, gather in a family circle around their Christmas tree and pass the evening singing and dancing. The second theme: The whole family, from grandfather to grandchild, hold hands and dance around the candle-lit Christmas tree singing an old Christmas song. The lyrics are, ‘Now it is Christmas again; Christmas lasts until Easter.’

The fourth and last movement expresses the joy of the people after once again being united in their beloved homeland Denmark. The first theme expresses loud jubilation. The second expresses quiet joy. Next, the two intermingle, are repeated, and finally the Danish national anthem is heard; now and again accompanied by fragments of the loud jubilation theme is heard and also of the Christmas song.

The ‘national anthem’ (kokka) referred to in the programme notes is actually not today’s national anthem, but a song entitled, Danmark, dejligst vang og vænge, written by Laurids Kok, probably in 1690, and published in 1695. Some commentators do describe it as Denmark’s oldest national song, and it is certainly an expression of early romantic nationalism. During the wars between Denmark and Prussia in 1848-50 and 1864 it was sung frequently, and it may well be that when Kate Hansen’s family visited Slesvig in 1893-4 it was still highly popular and even regarded as a kind of unofficial national anthem.

So, Kate I. Hansen’s choice of this particular song as one of her musical themes sheds an interesting light on the culture of Slesvig as she experienced it at the end of the nineteenth century.

*Note: K.I. Hansen was awarded an honorary doctorate by Chicago Musical College in 1930.