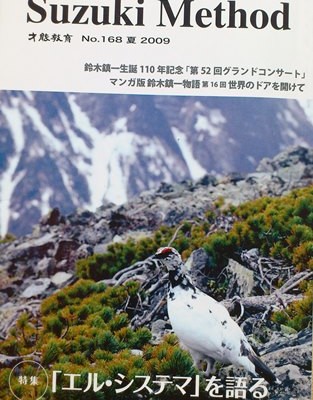 This month (on 17 October) is Suzuki Shin’ichi’s birthday.

Only a year ago, the Suzuki Method was described in the New York Times as “Japan’s Best Overlooked Cultural Export.”

Likewise, it still does not seem to be widely known that the Suzuki Method played a role in the development of another, now famous, method of training in Classical music, El Sistema. In the early years of El Sistema, in 1979, Kobayashi Takeshi, one of Suzuki’s earliest child pupils, was invited to Venezuela to teach. After only 2 months of rehearsing, the ensembles trained by Kobayashi performed at a concert where several Sistema orchestras played for an audience which included government members and representatives from the Japanese Embassy. Antonio Abreu, the founder of El Sistema, hoped to open a Suzuki academy and Kobayashi was invited back the following year. He did return, but eventually he found working in Venezuela too difficult and gave up his part in the project.

In December 2008 the Simon Bolivar Youth Orchestra of Venezuela visited Japan for the first time. Its performance in Tokyo was a resounding success. Leading representatives of the Suzuki community were fascinated. The following year they organized a discussion with the managing director of the Talent Research Institute and the Venezuelan ambassador to Japan, which was published in the Talent Education Research Institute’s journal. During the discussion affinities between Suzuki’s method and El Sistema were stressed and the desire for collaboration expressed.

For more details on Suzuki and Sistema, see Not by Love Alone.

The great violinist Ivry Gitlis (b.1922) passed away on 24 December 2020. Others, musicians, people who had the good fortune to meet him have written...read more →