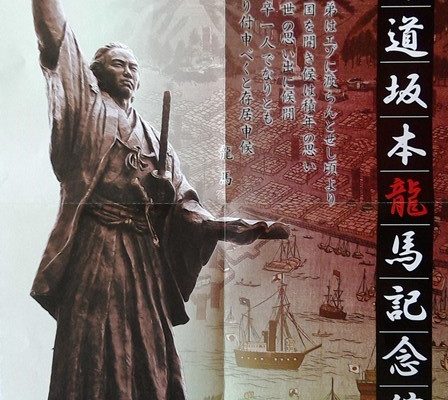 This year marks the 150th anniversary of the Meiji Restoration (明治維新 or Meiji Renewal in Japanese), dated from the proclamation of the restoration of political power to the emperor on 3 January 1868 (or the ninth day of the twelfth month of the fourth year of Keiô, according –the old lunisolar calendar, which continued to be used in Japan until 1873).  So,  for my blogs this year, I have decided to introduce some of the Japanese men and women who are the subject of my draft manuscript for The Meiji Miracle, people who helped bring about the Restoration and shape the era known as Meiji, which lasted until the emperor’s death in 1968.

In Sakamoto Ryôma’s lifetime, Hokkaido’s status as part of the Japanese state was, at best, tenuous.

It is true that the pre-historical Jômon culture on the Japanese isles, thousands of years before the Common Era, extended as far as Hokkaido, as archaeologist’s findings show. The subsequent Yayoi culture (from between 500 and 300 B.C.E.), however, does not appear to have extended beyond the area around present-day Tokyo. For the imperial court of ancient Japan, even the north of the main island of Honshû was perceived to be frontier land, inhabited by barbarians that had to be kept in check. Even when the Japanese state had come to encompass all Honshû, the northern islands remained outside it and few Japanese lived there. The indigenous Ainu had their own language and were significantly different from the Japanese in appearance and culture.

By the last decades of the Tokugawa shogunate, however, Ezo, as the island was then called, gained strategic importance because the increasing foreign threat; especially Russia’s southward expansion. The northern domain of Matsumae was traditionally responsible for the defence of the frontier, but in 1802 the shogunate dispatched its own commissioner to the region (named the Matsumae Bugyô in 1807). Sporadic efforts to assimilate the Ainu were made in the following years.

Max von Brandt, German representative in Japan from 1863 to 1875, who recommended the colonization of Hokkaido to Bismarck. (Wikipedia)

The Russians were not the only Westerners to have their sights on Hokkaido. In 1867 and again in July 1868, months after the coup that initiated the Meiji Restoration, the Prussian consul in Japan, Max von Brandt (1835 – 1920) suggested to Chancellor Bismarck that the island would make an excellent colony for Germany and recommended that Prussia take advantage of the internal struggles in Japan to seize it. Luckily for Japan, Bismarck had other priorities.

In the same year that von Brandt first made his suggestion, Ryôma wrote the letter that constitutes the clearest evidence of his own interest in Hokkaido and is prominently displayed in the Hokkaido Sakamoto Ryôma Museum and depicted in several of the museum’s publications. Dated Keiô 3 (1867).3.6, it is addressed to Indô Hajime, a vasal of Chôfu domain (a branch domain of Chôshû and one of Ryôma’s associates in his efforts to bring about the alliance between Satsuma and Chôshû. The relevant sentence is:

“From the time when I attempted to cross over to Ezo, opening up new lands has been a long-standing idea and a lifetime of consideration of mine, and even if I do it alone I will do it by all means.”*

Actually, in this letter, Ryôma also discusses developing the much smaller island of Takeshima (Dokdo), now such a bone of contention between Japan and Korea.** He was running a shipping company from Nagasaki with support from Satsuma domain – anti-foreign sentiment did not necessarily prevent samurai from realizing the benefits of foreign trade, and the foreign merchants had no interest in preserving the shogunate’s monopoly.

Whatever Ryôma’s ideas and plans, nothing came of them, at least not in his lifetime. Ryôma was dead by the end of the year. The Goryôkaku 五稜郭 star fort of Hakodate with the Hakodate Magistrate’s Office 函館奉行所, viewed from the Goryôkaku Tower五稜郭タワー, which as well as impressive views, features an exhibition about the Battle of Hakodate 函館戦争.

But members of his family took an active part in the colonization of Hokkaido after the Meiji Restoration. Ryôma’s nephew Sakamoto Nao (1842–1898) submitted a memorandum about Ezo to the Meiji government. When the government took over the Hakodate Magistrate’s Office the Shogunate had established after having been forced to open the port of Hakodate to foreign trade, Nao was among those appointed to the new government office. He took an active part in the Battle of Hakodate 函館戦争 against the last resisting forces of the Shogunate.

The Meiji government claimed Ezo, renamed it Hokkaido, and in 1869 established the Hokkaido Colonization Board (Kaitakushi). The Hokkaido Colonization Board existed until 1882, and the government invested enormous amounts of money into developing the island. Ex-samurai were encouraged to immigrate by as system allowing them to combine militia and farming.

Nao worked for the Hokkaido Colonization Board for a short time before moving on to a succession of posts in Tokyo and then to his home town of Kôchi.

That year, Sakamoto Naohiro (1853–1911). Nao’s younger brother Naohiro, a politician and Christian activist, emigrated to Urausu, in the Western part of Hokkaido with his family. A few years before, in 1895, Naohiro and a few like-minded men had formed the Hokkôsha or Northern Lights Association, which eventually numbered 112 households, about 650 people. In 1897 he led the pioneers to Kitami in north-eastern Hokkaido. Naohiro himself engage in political and missionary activities rather than farming.

Naohiro’s son Sakamoto Naomichi (1892–1972) became the heir to the Sakamoto family after his father’s death, but was relieved of his position in order to continue his studies, and did not take it up again until1941. He joined the South Manchurian Railway Company after graduation. From 1929 to 1940 he lived in France, having initially been sent to Paris to take part in the International Railway Congress.

Other descendants of Ryôma in Hokkaido include Sakamoto Naoyuki (1906–82), son of Naohiro’s eldest daughter, a farmer and artist known for his landscape paintings and his designs decorating the packaging of the Rokkatei confectionary.

So, although Ryôma himself never made it to Hokkaido, several of his descendants have prospered there. And, as the Hokkaido Sakamoto Ryôma Museum shows, there is clearly enough local support to celebrate his memory on the island. The museum was opened in 2009 and the enormous statue facing it across the road was unveiled the following year. Sakamoto Noboru, the 9th heir to the Sakamoto family, in the museum brochure expressed the conviction that, “In a time were a Ryôma for the Heisei era is needed, his [Ryôma’s] way of living and attitudes to live will surely invite sympathy.”

On 8 July 1853 a frightening sight met the eyes of the people of Shimoda village, at the entrance into the bays of Sagami and...read more →