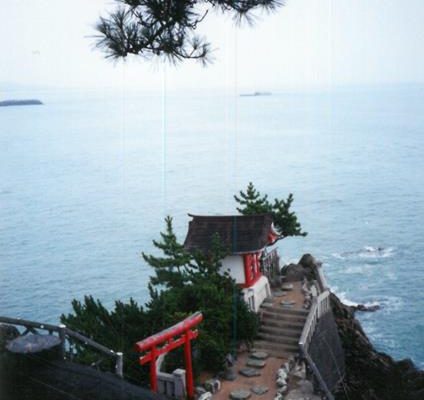 This year marks the 150th anniversary of the Meiji Restoration (明治維新 or Meiji Renewal in Japanese), dated from the proclamation of the restoration of political power to the emperor on 3 January 1868 (or the ninth day of the twelfth month of the fourth year of Keiô, according to the old lunisolar calendar, which continued to be used in Japan until 1873).  So for my blogs this year, I have decided to introduce some of the Japanese men and women who are the subject of my draft manuscript for The Meiji Miracle, people who helped bring about the Restoration and shape the era known as Meiji, which lasted until the emperor’s death in 1968. 2. Hero of the Restoration

Katsu Kaishû 勝海舟 (1823–1899) had studied sword fighting, Zen, and Dutch learning and had his own private school in Edo. A recognized expert on foreign and especially naval matters and coastal defence, he had served as the captain of the ship that took the delegates shogunate’s first foreign mission to the United States in 1860. Katsu worked to build up a navy for the shogun and a naval school in Hyôgo, near present-day Kôbe. Ryôma became Katsu’s assistant and disciple, travelling for him and with him, helping him to recruit and train young samurai from all over Japan.

The experience taught Ryôma many a lesson in national politics. He realized the danger and futility of impetuous action, such as that of Chôshû domain in spring 1863, when its military forces fired on foreign ships passing through the straits of Shimonoseki. As series of sea skirmishes followed, but as Ryôma, undoubtedly thanks what he learned from his mentor, Chôshû could not win. In summer 1864 a combined force of British, French, Dutch and U.S. ships bombed forts along the coast and Chôshû was forced to make peace with the foreigners.

Chôshû forces did more than fire on foreign ships; they attempted to invade the capital and seize control over the imperial court. Driven out by the shogun with the help of Satsuma troops in summer 1864, they were branded “enemies of the court”.

The conservative forces in the shogun’s government now felt confident that they could reassert the shogunate’s supremacy. They had those in favour of reforms, including Katsu, dismissed. Ryôma lost his mentor, and had to fear for his own safety. But the contacts he built up while working with Katsu stood him in good stead. Among them, two young men from Satsuma and future members of the Meiji government, Saigô Takamori and Ôkubo Toshimichi, became his allies, and together they helped bring about the decisive event that sealed the fate of the shogunate; the alliance between its most powerful enemies, Satsuma and Chôshû.

The young samurai who had made ties across domain boundaries had long felt that what united them, the will to protect emperor and country against foreign invasion, was stronger than the domain boundaries that separated them. Their lords took longer to reach this conclusion. On the other hand, neither Satsuma nor Chôshû wished to see the shogunate reassert its supremacy, and how better could they prevent this than by joining forces? Even so, suspicion on both sides ran deep, and here the mediation by Ryôma and other loyalists from Tosa played a crucial role. On the Chôshû side Nakaoka Shintarô, like Ryôma a runaway samurai from Tosa, helped persuade Kido Takayoshi to negotiate with Saigô.

Finally, in Kyoto on 7 March 1866, the two representatives of their domains reached an agreement. From now on any attempt to centralize the government of Japan would need the consent and cooperation of these two contenders. The players were taking their positions for the final match.

On the evening of the following day, in an inn in Fushimi, Ryôma and a companion, on their way to bed after their bath, heard a strange noise. It sounded like someone sneaking around on the floor below theirs and clattering staves. A moment later, the door to their room slid open and a young woman warned, “Look out! The enemy have invaded unexpectedly, and men with spears are coming up the stairs!” The two men each grabbed their weapons, and by the time their enemy opened the door they were ready to defend themselves. Moments later they were in the middle of a desperate fight against twenty armed men, which has since enthralled millions of Japanese watching screen versions of it.*

They escaped by the skin of their teeth and found shelter with the lord of Satsuma. The maid who had warned them became Ryôma’s bride. Soon, though, he was again busy, both running a shipping company from Nagasaki with support from Satsuma, and continuing his political efforts. His aim was to persuade the lord of his own domain, Tosa, to join the alliance between Satsuma and Chôshû. More than that, he hoped to convince him that he should persuade the shogun to resign. Ryôma even drew up a plan for a new political system.

Lord Yamauchi Toyoshige (or Yôdô), however dithered. Ryôma enlisted the support of officials from his domain. Satsuma and Chôshû were preparing for war, but Ryôma (and others) realized that an internal war would be disastrous in the face of several foreign powers poised to make use of Japan’s weakness for their own ends. Lord Yamauchi had his own reasons for not wanting a war; apart from his lingering feelings of loyalty to the shogun, he feared that a war would result in his own domain losing all influence. He finally agreed to petition the shogun to resign.

The last months of 1867 saw much confusion; preparation for war, frantic negotiations to avoid it, councillors trying to influence their lords, men like Ryôma moving back and forth to mediate, conflicting messages from the imperial court, masterless samurai plotting revolution, the shogun’s police forces ruthlessly cracking down on any suspected troublemakers.

Finally, in November, the shogun agreed to resign, doubtlessly expecting to retain a leading part in the government of the country. But Satsuma, Chôshû and their allies had other ideas. In the early hours of 3 January 1868, their troops took their positions at the gates of the imperial palace, while one of their allies from the court nobility, Iwakura Tomomi secured the young emperor’s approval of the move and had him proclaim the resumption of direct rule by the emperor.

The Meiji Restoration had begun. Sakamoto Ryôma did not live to see it. A few weeks before, in the evening of 10 December 1867, he once again sat in a borrowed bedroom with a companion, Nakaoka Shintarô; this time in the house of a soy sauce merchant in Kyoto. Again a gang of attackers entered the house. But no maid gave them advance warning, and no back exit provided escape; for Ryôma, who felt unwell, had preferred the convenience of a front room. Their enemies cut both men down, before they could even draw their swords. Ryôma died on the spot, Nakaoka Shintarô hung on for two days. Ryôma was thirty-two, Nakaoka twenty-nine.

His early death ensured Ryôma’s fame as a national hero, the greatest of all in the eyes of many Japanese. His romantic life, his good humour, his optimism, his confidence, his indifference to material comfort or worldly position as well as his courage and calm in the face of danger made him the ideal samurai hero. Moreover, his important role in bringing about the changes of 1868 cannot be denied.

His narrow escape the year before he died enabled him to mediate in a second momentous event after the alliance between Satsuma and Chôshû, when, urged by the lord of Tosa, the last shogun surrendered his political powers to the emperor ending more than 250 years of Tokugawa rule. Ryôma died in a moment of triumph; his plan to achieve a peaceful transfer of power seemed to have succeeded, the Restoration wars had not yet broken out.

Had he lived, what could he not have achieved? His transformation from an uneducated, politically naive swordsman, to knowledgeable, realistic politician, as well as his letters and plans, suggests that he might have adapted to the new order, even helped build it.

By the last weeks of his life, however, others were making the big decisions about Japan’s future and he had little part in them. The militant phase of a revolution demands different qualities than the ensuing phase of reconstruction; many of the shishi who did great deeds before 1868 achieved nothing of note in the years to come, as their entries in biographical dictionaries testify. Would Sakamoto have faded into obscurity with them? Or would he have joined the ranks of the disillusioned and died a traitor, like his one-time ally from Satsuma, Saigô Takamori?

Sakamoto Ryôma did not grow old and disappoint: his early death as well as his deeds enabled his elevation to one of Japan’s most popular heroes.

And where does Hokkaidô come in? This will be revealed in Part 3.