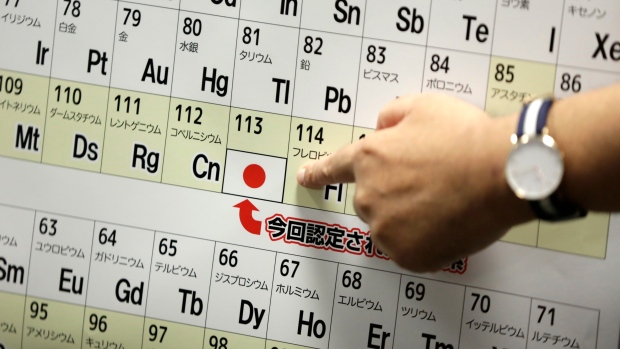 On 1 December The Japan Times ran a headline, “With ‘nihonium,’ Japanese scientists become first from an Asian country to name atomic element.”  The new element was artificially synthesized by a team of researchers at the government-backed Riken research institute and has 113 protons in its nucleus.

The Japan Times did not mention that Japan narrowly missed having an element called after the country over one hundred years earlier. While working in London from 1904 to 1906 under the Nobel Prize winner Sir William Ramsay (1852-1916), the Japanese chemist Masataka OGAWA discovered what appeared to be element 43. On Ramsay’s recommendation, Ogawa named it “nipponium,” Np for short. Like the less martial-sounding “nihonium” the element was thus meant to be named after “Nippon” or “Nihon” 日本, as the Japanese call their country.

But it was not to be. In 1925, two Germans, Ida Noddack-Tacke and her husband Walter Noddack, published their discovery (together with Otto Berg from a Siemens laboratory) of two new chemical elements, rhenium 75 and masurium 43. Element 43 could not be confirmed until C. Perrier and E. Segré found it in 1937 and called it technetium. Rhenium, however, named after Ida Tacke’s home, the Rhineland, is still in the periodic table under that name.

By 1925 Ogawa was sixty years old and the president of Tôhoku Imperial University in Sendai in Northern Japan. His heavy responsibilities left him little time for research. But in the evenings he could always be seen in the laboratory, and he did his best to keep up with the current literature. How disappointed he must have been, when he read the article by Walter and Ida Noddack and searched in vain for a mention of his own name!

In the 20 years since his discovery of “nipponium”, he had tried to learn more about this new element, but his research had led nowhere. He had given his graduate students research projects with a view to resolving the question, but they had foundered or asked for new projects. Behind his back, students called “nipponium” the “phantom element”, because they suspected it did not exist at all. Ogawa, however, remained convinced that “nipponium” was no phantom. But, something, somewhere seemed wrong…

Born in 1865 into a Samurai family on the island of Shikoku, Ogawa, despite the early loss of his father, his family’s poverty, bullying at school and other setbacks, managed to enter Tokyo Imperial University in 1886. In those days it was the only imperial university and had a virtual monopoly on science education. After graduation Ogawa taught for a few years before returning to university to do research. But although his further studies secured him a more prestigious teaching post, he longed to study abroad. In 1904 he finally achieved his goal and set sail for London on the eve of the Russo-Japanese War.

At London University Ramsay took him under his wing and set him to work on a newly-discovered mineral called thorianite. Ramsay suspected that it might possibly include a new element. Ogawa went to work on the part of the substance Ramsay had not yet identified. Finally he thought he could determine the unknown substance’s atomic weight as 100. It would thus fit nicely into what was then still a gap in the periodic table between the elements molybdenum 42 with the atomic weight 96 and ruthenium 44 with the atomic weight 101. So it looked as if in addition to the military victory over Russia Japan could now boast the discovery of element no. 43 the inscription of its country name into the periodic table. Ogawa published his results in England (in Chemical News) and in Japan in 1908. He was honoured with a prize and a doctorate in his home country and in 1911 he became professor and head of the Science Faculty at Tôhoku Imperial University, established in 1907. In 1919 he became the first University president to be elected by the University, instead of appointed by the Ministry of Education. He acquitted himself so well, that he was re-elected twice and remained president until his retirement in 1928.

Ogawa’s duties at the fledgling university left him little time for the research needed to confirm the existence of “element 43” Nor did he have state-of-the art equipment. Not even his colleagues at Tokyo Imperial University had an X-ray spectroscope like the one that had enabled the Noddacks to make their discovery. When they finally obtained one in 1929, Ogawa sent a sample of his material to Tokyo for analysis. Even if he learnt the result, however, he did not reveal it. In July 1930, while working in his lab as usual – retirement had not changed this – he fell ill and a few days later he was dead. We do not know how many of his samurai ancestors died on the battlefield, but we can certainly say that Ogawa Masataka died fighting.

The mystery of his “phantom element” was not solved until 1996, when the Japanese scientist Kenji YOSHIHARA, in a lecture at an international symposium, compared Ogawa’s description of “nipponium” to the characteristics of the other elements in the manganese group. He concluded that, apart from the valence and the atomic weight, which Ogawa had apparently miscalculated, “nipponium” had all the properties of rhenium. In short, Ogawa had discovered element 75 twenty years before the Noddacks.

If Ogawa had not made that fatal error in his calculations, if had been able to rectify it, to devote more time to his research, if he had had managed to get hold of an X-ray spectroscope, if only … – then element 75 might still be named after the Land of the Rising Sun instead of the Rhineland, and Ogawa Masataka would be acclaimed as its discoverer.

And Professor Kosuke MORITA and his team would have to name element 113 something else. THERE WILL BE MORE ABOUT OGAWA AND ABOUT OTHER PEOPLE OF MEIJI JAPAN IN ONE OF THE BOOKS I AM WORKING ON, TENTATIVELY (AND PLAYFULLY) ENTITLED, “THE MEIJI MIRACLE.”