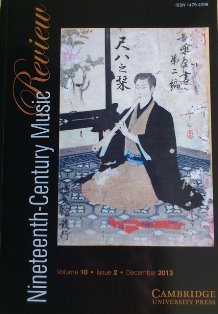 Yasuko Tsukahara (Professor of Japanese Music History at Tokyo University of the Arts):
“State Ceremony and Music in Meiji-era Japan”
Hermann Gottschewski (Associate Professor at the University of Tokyo):
“Nineteenth-Century Gagaku Songs as a Subject of Musical Analysis: An Early Example of Musical Creativity in Modern Japan”
Kiku Day (ethnomusicologist and shakuhachi player):
“The Effect of the Meiji Government’s Policy on Traditional Japanese Music During the Nineteenth Century: The Case of the Shakuhachi
Ena Kajino (violinist and PhD candidate at the University of Tokyo):
“A Lost Opportunity for Tradition: The Violin in Early Twentieth-Century Japanese Traditional Music”

The articles deal with aspects of the complex interaction between Western and traditional Japanese music, at topic that was long neglected, because researches tended to specialize in one or the other. If you are interested in music in Japan or in Japanese culture in general, please take a look at this publication!

Well, sort of. I found out that my book Private Academies of Chinese Learning in Meiji Japan has apparently been pirated by a Russian hacker....read more →