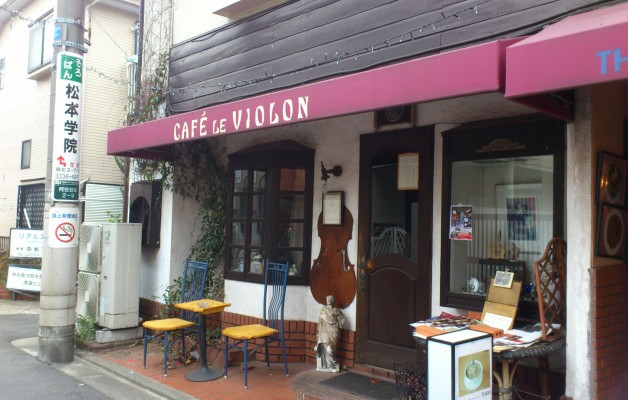 Towards the end of my stay in Tokyo last year, I visited the Café Le Violon in Asagaya. I learnt about the Café Le Violon through a youtube video. The description said that the recording from the original SP had been made at the Violon. It may have been this one, Suwa Nejiko (1920-2012) playing Dvorak’s Indian Lament in 1932).

The Café Le Violin is a “meikyoku kissa”, a coffee house where people go in order to listen to recorded classical music. They first appeared in the 1920s, and the Lion, which opened in Shibuya in 1926, exists to this day. The heyday of the classical music coffee house was in the 1950s and 1960s, when audio equipment and records were still too expensive for most people to buy their own. Once record players and records became cheaper, the cafés went into decline, but recently they have experienced a bit of a revival.

The Violon is part of this trend. In 2005 its owner bought the entire interior of a meikyoku kissa which had closed and resurrected it in Asagaya. For the price of a coffee you can sit for hours in the surroundings of an old-fashioned coffee house, so different from the brightly-lit, often sterile coffee shop chains that have come to dominate the scene, and listen to recordings played through a state-of-the-art sound system with huge wooden speakers. Stacks of LPs fill the shelves along one side of the room.

I asked the owner whether he had a recording of the Russian violinist Alexander Mogilevsky (or Moguilewsky; I mistakenly thought it was his version of La Folia that had been recorded at the Café Le Violon). I would have loved to hear Mogilevsky’s tone through those great wooden speakers and, if possible, take a picture of the wonderfully romantic cover portrait to include in my forthcoming book. Unfortunately, the owner did not have anything by Alexander Mogilevsky. A customer must have brought his own record, he said. Customers take their own gramophone records or CDs to hear them played through the superior sound system of establishments like the Violon.

Instead, I was treated to an LP recording of another Russian (judging from the consonant-packed name) playing Paganini’s Concerto No. 2. Well, that too sounded great!

Today is the third anniversary of the North-Eastern Japan earthquake and tsunami. Last year in Tokyo one could get the impression that it is past...read more →

Yesterday, 20 September, was an exciting day for me; I got this website (however rudimentary at present) launched, and I managed to swim an entire...read more →