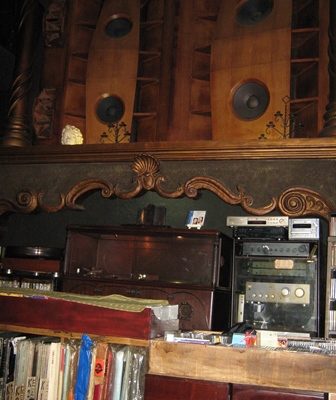 With hindsight I could kick myself. For 18 months from 1987 to 1989 I lived within walking distance of Dôgenzaka slope in the hyper-hip Shibuya-district of Tokyo, and yet I never found the Lion. Admittedly, it is located in one of the least savoury side streets of Dôgenzaka. But you forget that once you step inside and feel you have entered another era. 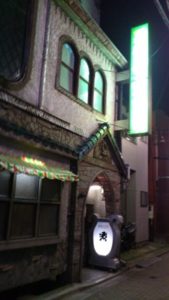 The Lion is one of the oldest so-called “meikyoku kissa”, a coffee house where people go in order to listen to recorded classical music. They first appeared in the 1920s, and the Lion, established in 1926 exists to this day. The heyday of the classical music coffee house was in the 1950s and 1960s, when audio equipment and records wee still too expensive for most people to buy their own. Once record players and records became cheaper, the cafés went into decline. But recently they have experienced a bit of a revival.

The dark interior provides a stark contrast to the brightly-lit, often sterile coffee shop chains that have come to dominate the Tokyo scene. The chairs, all facing the same directions, are on two floors, both dominated by the gigantic speakers. Little signs on the table tell you to refrain from conversation. You come here to listen to music, not to chat. So in some ways the Lion is more like a concert hall than a coffee lounge, and at certain times the owner even stages “record concerts”. At others, requests are welcomed The first time I was there someone had requested one of Tchaikovsky’s piano concertos, played by Horowitz, as we were told through a public address system. There were hardly any customers that evening, so I guess it would have been easy to have a requested piece played. At the height of the Lion’s popularity you apparently might have had to wait all day to hear your request played.

Some customers bring their own old vinyl record or even new CD to listen to through the state-of-the-art, made-to-order sound system. I have read that people come to the Lion from as far away as Osaka to listen to their own records. 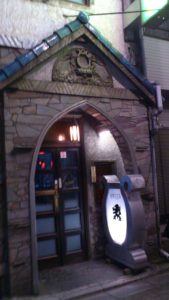 If you’ve not paid the train fare from Osaka it will only cost you the price of a coffee to sit in the Lion for hours and listen to classical music, often historic recordings on LPs, which some say sound better than CDs. Certainly they have a sound of their own and add to the sense of having stepped into another age.

This month (on 17 October) is Suzuki Shin’ichi’s birthday. Only a year ago, the Suzuki Method was described in the New York Times as “Japan's...read more →