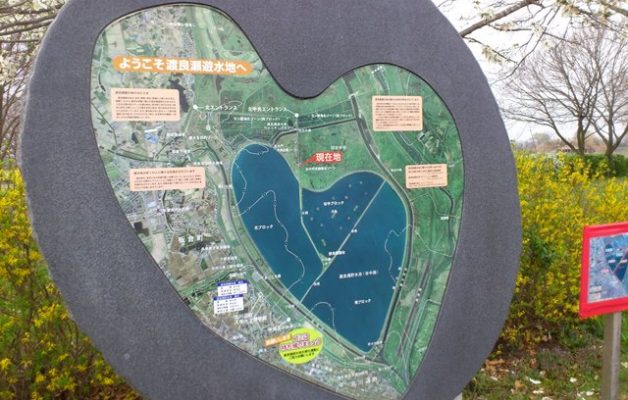 Yanaka 谷中村: A losing battle to save a village The Watarase Yûsuichi nature reserve 渡良瀬遊水地 looked bleak on the overcast April day when I visited it, but also invitingly peaceful. Spring had not quite made it to the area yet, it seemed; most of the trees were still bare, and not much seemed to be flowering. Birds were singing, which seemed to emphasize the stillness. Incongruously, I was reminded of a family visit many years ago to Wicken Fen, the famous wetlands nature reserve in East Anglia, near Cambridge. I guess it must have been something about the atmosphere. In reality, the two nature reserves could not be more different. “People say, what a wonderful natural habitat”, said my guide, Mr Shimano, the director of the Ashio Copper Pollution Case Tanaka Shôzô Memorial Museum in Tatebayashi, wistfully, “they don’t realize that a community of local people once had their homes here.”

The 450 farming families in the village of Yanaka did not wish to leave and see their homes flooded by an artificial lake. They may have gone quietly nevertheless, accustomed as they were to submitting to authority. But then Tanaka Shôzô made their cause his. A farmer’s son himself, and still feeling the kind of paternalistic responsibility he had known as a village headman in another age, he resolved to defend Yanaka and its people against what he saw as misguided government plans. In 1904, together with two helpers, he moved into the village and began his efforts to educate the people, doing his best to organize the demoralized villagers into a community capable of fighting for its constitutional rights. New signboards have been erected, but this old one gives not only the layout of the village, but also the names of people who lived in the houses.

Most of the villagers left all the same, as the dispute over Yanaka dragged on for years. But a few stayed. Braving the floods year after year, repairing the dykes again and again, they struggled to eke out a living while keeping up their protests to the authorities.

In 1907 the prefectural government decided to evict the remaining nineteen households by force. That June, a demolition squad moved in and systematically destroyed the village. Still the farmers hung on, sleeping in the open. One of them, a young man, later reported how his family of eight had to huddle under a single broken umbrella when it started to rain at one o’clock in the night, and how Tanaka came around with his Tokyo friends to see how they were coping, “going round through the driving rain from family to family, now rowing, now plodding through the mud, now pushing their way through the head-high summer grasses.[…] I shall never forget how deeply I was moved that night by his warmth, his sincerity, that was more precious then than anything in the world.”

Once the demolition squad had left, the villagers built shacks, worked the land as best as they could and battled for higher compensation than they were being offered; another court case that dragged on for years until it was finally decided in the villagers’ favour.

Walkers can pause to read the names of the families who once lived here.

The last inhabitants of Yanaka left in 1916. Just as Tanaka had predicted, sacrificing their village did not prevent the floods. They continued to plague the area even after the Second World War, still polluting farmland, although to a lesser extent than previously. Only when they became unprofitable were the Ashio mines closed, in 1973. The following year, victims of pollution by the Ashio mines achieved an unprecedented settlement of 1, 500, 000, 000 yen with the Furukawa Mining Company, mediated by the government: a clear sign that pollution in the area had not ceased in the 1900s.

During his final years, Tanaka developed something like a spiritual view of environmental conservation, identifying care of the natural environment with “the way of heaven”. When he died, on 4 September 1913, the only worldly possessions he left behind him in a haversack by his pillow were his diary, a list of persons interested in the care of rivers, a New Testament, a copy of the Constitution bound in one cover with a copy of the Gospel of Mathew, a few stones and some tissue paper.

Tanaka Shôzô’s memory is well preserved. In the Niwata household, the room where he died has been kept pretty much as it was at the time he died. The present head of the family showed, as a photograph of Tanaka on his deathbed to prove it. However, the Niwata residence itself has been moved about 200m from its original location when the Watarase river’s course was straightened and redirected. Unryûji, the temple that became the headquarters of the protesters and one of several temples where part of Tanaka’s remains were laid to rest

Nearby, at Unryûji temple, where the protestors once had their headquarters, regular commemorative ceremonies are held at a hall next to his grave. Actually, the grave site is one of six where part of his remains are buried. The sixth site was discovered comparatively recently.

Recently, the triple disaster of 2011 has given new cause to recall the Ashio Pollution Scandal and Tanaka Shôzô’s fight. Not only did the earthquake cause polluted debris buried in the ground to resurface. The museum in Tatebayashi received a fair number of visitors who have been evacuated from Fukushima, some of whom now live nearby. Learning about the people of Yanaka, forced to leave their village as a result of environmental pollution, many of them exclaim, ”just like us!”

Thus the devastation caused by the Ashio Copper Mines can be felt to this day.

Note: Much of the information about Tanaka Shôzô, including the quoted eye witness account, comes from Kenneth Strong, Ox Against the Storm: A Biography of Tanaka Shozo, Japan’s Conservationist Pioneer (University of British Columbia Press, 1977).

Sakamoto Ryôma 坂本龍馬 – A Hero of the Meiji Restoration (1)