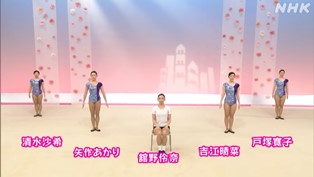 Yesterday (4 February 2022), the Danish radio’s morning programme (DR P1 Morgen) reported on research done by Professor Lars Andersen (the National Research Centre for the Working Environment in Copenhagen) proving that simple physical exercises anybody can do at their workplace can significantly reduce work-related physical complaints, which account for a significant amount of sick leave. Doing the exercises together with colleagues can have beneficial side-effects, such as improving relationships at work.

Well, this may have been news to Danish listeners. If any Japanese who understand Danish were listening in, they could be forgiven if the information elicited a big yawn at what might have seemed to them like an old hat, or else a sense of smugness. 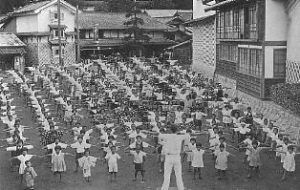 Almost a hundred years ago – in 1925, when public radio broadcasts had barely been invented – that the Metropolitan Life Insurance Company in New York began broadcasting radio exercises as a public service. Even before that, Japanese observers visited the company and reported back to the Ministry of Communications.

For the Japanese government, the benefits of exercise to music were well known: back in 1875 Isawa Shûji (1851-1917), then head of Aichi Prefecture Teacher Training College, reported to the Ministry of Education on his experiments with Friedrich Froebel’s ‘movement games’ (Bewegungsspiele), in Japan. Kindergartens spread only slowly, but Froebel’s movement games, which came to be known as yûgi in Japan became a staple of physical education in primary schools.

Three years, after Metropolitan Life, Japan’s national broadcasting cooperation (NHK) introduced their own version: rajio taisô, or radio callisthenics. It took the form of a three-minute series of simple exercises to piano accompaniment broadcast every morning at the same time. It had endured almost continuously to this day. These days rajio taisô have expanded into television:

Please click the link below for the actual video (NHK doesn’t allow playing on other websites).

Ironically, the only time the institution was temporarily abolished was at the end of the Second World War, when the United States occupation authorities banned rajio taisô, which Japan had exported to its colonies in Korea and Taiwan, on the grounds that it was supposedly a symbol of militarism. Indeed, some of the audio examples compiled for the CD, Rajio taisô no subete (Everything about Radio Callisthenics) are rather militaristic in style. But the U.S. authorities were, in effect, banning an American import – imported, moreover, at a time, when Japan, a founding member of the League of Nations, was an avid supporter of international efforts to maintain peace.

Today, rajio taisô is widely practised, as anyone who has spent time in Japan can attest. You can sometimes spot neighbourhood groups doing the exercises in public places early in the morning, while the programme is broadcast over the public address system; particularly in the summer holidays, when schoolchildren are still encouraged to get up early and get moving. At some workplaces, employees are called to stand up behind their desks and preform the exercises at fixed time during the working day: needless, to say, recordings of the NHK-sequences are available. During my brief stay at a volunteer camp in Tohoku in 2012, at morning assembly when we were told about the work for the day, we also did rajio taisô, the instructions on the taped version were in a Tohoku dialect, to the general amusement of the participants, most of whom came from other regions (I don’t have a picture of the actual taisô, as I joined in; the exercises were led by the nice guy in front, who I believe was local). 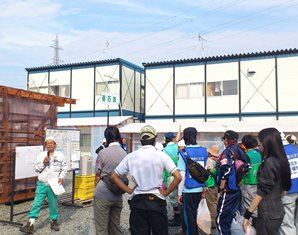 Of course, the exercises can also be done without being part of a group. Television, moreover, made it possible to demonstrate the exercises to the uninitiated or the forgetful, so they can perform them without even leaving the home. The NHK’s demonstration videos invariably include a person doing the exercises while seated on a chair. Presumably this reflects awareness of Japan’s rapidly aging population.

With a history of over 90 years, rajo taisô has become a cultural icon. If you want to see some of the forms it takes, try searching for ラジオ体操 on Youtube. Or try the exercises yourself. You don’t really need an English version, but look for ‘Radio taiso’ or ‘Radio callisthenics’, and you will find quite a few.

There will be a section on yûgi in the book I am finishing, Music and the Rise of Modern Japan: Joining the Global Concert.