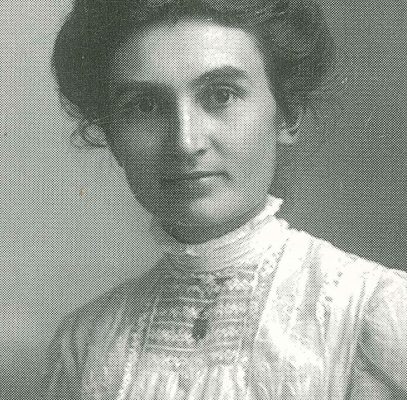 My research often leads me in unexpected directions

My interest in Kate Ingeborg Hansen (1879-1968) was aroused when I started researching musical life in 19th– and early 20th century Sendai. Hansen, a native of Kansas, came to Sendai in September 1907 as a missionary, together with Lydia Almira Lindsey (1880-1971). For nearly 40 years, Hansen and Lindsey taught at Miyagi Jogakkô, now Miyagi Gakuin (Miyagi College), a missionary school for girls founded in 1886.

Kate Hansen taught music, and thanks to her work, Miyagi College could soon boast one of the best advanced music courses in Japan. Even more interesting for me were her reports on musical life in Sendai as she encountered it in her early years. I may well write about them in a later blog.

Today, however, I am writing about her composition “Schlesvig” (K.H.’s spelling), a string quartet inspired by her father’s homeland, a region whose fate at the mercy of two contending nations, Denmark and Germany.

Kate Ingeborg Hansen, as I’d guessed from her name, had Danish roots. Her father immigrated to America soon after his native Shlesvig was annexed by Prussia in 1864. He did well in his new homeland; so well that he could afford to take his family to Denmark in 1893. They stayed for several months, and for part of that time Kate lived with an aunt who had married a German and been ostracized by her fiercely anti-Prussian family. It was a profound experience for her, and she kept in touch with several of her Danish relatives.

Hansen’s studies included composition; presumably it was as part of her practical exercises that she completed “Schlesvig” in 1929. I came across a copy of a page of the manuscript by chance while examining her papers at the University of Kansas last year and was immediately intrigued. My fascination grew when I learned that the work was premiered in Japan. The performers were none other than the famous Suzuki Shin’ichi and three of his brothers. In 1928 they had formed the Suzuki String Quartet, one of Japan’s first professional quartets. I don’t (yet?) know how Kate Hansen met them, but in summer 1931 they performed the first movement and on 11 June 1932, at a concert at Miyagi College, the entire work.

“Schlesvig” has for movements (I have added Kate Hansen’s handwritten comments on the concert programme she sent to her family in Kansas):

(b) Regrets (“How they felt about Germany”)

(d) Reunion (“When they went back to Danmark”)

To my knowledge, this quartet with a truly transnational history has never been performed in the country that inspired it. So I am working on a project to make it heard in Denmark, perhaps both in Sønderjylland (as Schleswig is now called) and in Copenhagen.

On 8 July 1853 a frightening sight met the eyes of the people of Shimoda village, at the entrance into the bays of Sagami and...read more →