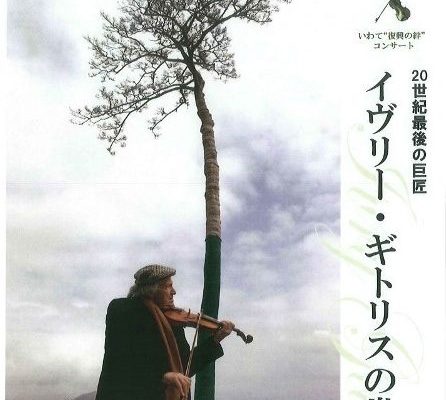 The great violinist Ivry Gitlis (b.1922) passed away on 24 December 2020. Others, musicians, people who had the good fortune to meet him have written about him, much better than I can do. Nevertheless, I’m re-posting a blog I wrote for violinist.com a year after the North-Eastern Japan earthquake and tsunami of 2011. In Japan, playing in support of the victims is surely what he will be remembered for, if the Kyodo News report of 25 December is anything to go by.

I myself was deeply impressed by what I read about Gitlis at the time. While many foreigners fled Japan in panic, and foreign musicians cancelled their tours, Gitlis made it known to his managers in Japan, Tempo Primo, that he wanted to come and play for disaster victims as soon as possible. As I write this, Tempo Primo still have his letter of condolence displayed on their webpage.

Oh well, some might have said, Gitlis, is nearly 90, so what’s he got to worry about, and in February 2012 a fellow-violinist, Devy Erlih (b. 1928), died after being hit by a truck in Paris. Post-tsunami Ishinomaki was, however, not the most comfortable place to visit. For the Japanese – and not just the people who suffered most – it meant a lot, that Gitlis nevertheless did visit Ishinomaki. The August issue of the magazine String reported his visit on the first inside page under the title “Gitlis’ Tears”, with a photograph of him surrounded by Japanese children in school uniforms. He told String that as soon as he heard the news, “I immediately wanted to visit the areas affected by the disaster and bring music to them.” Gitlis performed in the gymnasium of Ishinomaki High School for Girls on 1 June; he talked to a group of kindergarten children he met by chance. Gitlis had been visiting Japan regularly for the last 30 years “Until now I did not understand Japan’s true nature and how wonderful it is,” he told the interviewer of String.

Among the pieces he played was Elgar’s “Salut d’Amour.” Presumably hardly anyone in Ishinomaki at the time was in a position to video his performance and upload it on Youtube, so here is an older (?) performance by Gitlis (according to the actual video, the pianist is Shuku IWASAKI, although the caption underneath says, it is Shigeo NERIKI).

His other offerings included an improvisation on the well-known song, “Hamabe no uta” 浜辺の歌 (Song of the Seashore) . He played it again on 11 March 2012, when he became the first to play the “tsunami violin”, an instrument partly made of tsunami driftwood by the luthier Nakazawa Muneyuki 中澤宗幸. His performance, followed by a series of concerts in Rikuzentakata, Iwate prefecture, was to inaugurate a relay that would take the instrument around the world to a total of 1, 000 violinists (as of 2017 the number was 500). The “Tsuanmi Violin Project” is still going strong, and will presumably reach a climax in 2021 when the tenth anniversary is marked.

A few months later (26 June), he played “Hamabe no uta” in Paris, in front of a large photograph of his previous performance under famous Lone Pine 一本松 in Rikukuzen Takata:

I have not found a video of his actual performance under the pine, but here is video (in Japanese) that features a short clip of Gitlis improvising on the tsunami violin at the ceremony to commemorate the dead on the first anniversary of the disaster, followed by a short comment by himself in English (after about 1 minute):

The magazine Sarasate too carried pictures of Gitlis in Ishinomaki on one of its front pages, including one of him playing in the gymnasium of Kadowaki Middle School, where he was joined by the violinist Waseda Sakurako 早稲田 桜子, who had studied with Gitlis in Paris for two years. The reporter for Sarasate contrasted Gitlis’ behaviour with that of several musicians who cancelled their visit to Japan. When she met Gitlis, he had himself felt an earthquake the previous night in his hotel in Tokyo; a “huge vibrato,” he called it. His interviewer underlined Gitlis’ courage: she told her readers how he played for people in England during WW2 as well as working in a factory; how he later joined soldiers in the front line during the war in Israel, and braved the barricades during the May Revolution in Paris in 1968 in order to play for the people. Gitlis’ advice to Japanese musicians not knowing what to do in the midst of a mood of self-restraint and cancelled engagements in the wake of the triple disaster was, “follow the voice of your own heart.”

He surely followed his. Here is a short video with snippets from a recital in Tokyo in 2013. At over ninety years old, he had passed his zenith as a violinist, but he was still able to give a performance that must have impressed and moved his audience.

With hindsight I could kick myself. For 18 months from 1987 to 1989 I lived within walking distance of Dôgenzaka slope in the hyper-hip Shibuya-district...read more →