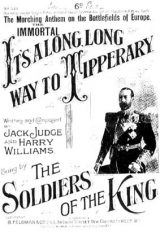 Come to think of it, it’s a really long way to Tipperary from the provincial town in northern Japan. But that didn’t prevent a Japanese high school student from singing the テッペラリーソング (‘Tipperary Song’), in a concert at Miyagi Teacher Training College in Sendai in February 1916.

Published in 1912 as It’s a Long Way to Tipperary was first recorded in 1914, and became a favourite marching song from the beginning of the First World War. Tomorrow is Armistice Day or Remembrance Day, and It’s a Long Way to Tipperary, although originally a music hall song, is associated with the memories of that war to this day. Its popularity was not limited to British soldiers. The recording by the popular Irish singer John McCormack became a huge hit, selling millions of copies worldwide. Indeed, the writer’s family receives royalties to this day. So popular was the song, that it was even taken up by French, German and Russian soldiers.

So it’s hardly surprising that a few of them found their way to Japan and even to the northern provincial town of Sendai.

Japan, moreover, was an ally of the British in WW1, the two nations having concluded the Anglo-Japanese Alliance in 1902. Japan declared war on Germany on 23 August and proceeded to take the German colonies in Asia and the Asia-Pacific, starting with Kiaotschou (Jiaozhou); since part of province Shandong, where Germany had mining and railway concessions. Tsingtao (Qingdao) the largest city in the German colonial sphere, capitulated on 7 November. In 1915 Japan helped Britain suppress mutiny of Indian soldiers in Singapore. 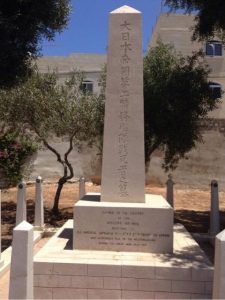 Japan even supported the British in Europe. In 1917, after Germany had started an all-out submarine war, which threatened the transport of troops and goods, Britain asked Japan to support its operations in the Mediterranean. Japan sent ships to Malta in April 1917, followed by more in the summer, as well as providing skilled personnel to make up for the shortage on British ships. There is a monument in the Naval Cemetery Malta commemorating Japanese officers and men who died in Mediterranean.

All in all, however, Japan’s gains in WW1 far outweighed its losses (reportedly less than 1,000): one might even argue that it was war’s greatest winner in WW 1. The Versailles Peace Treaty, signed on 28 June 1919 names Japan among the ‘Principal Allied’ powers. Japanese war ships took part in the victory celebrations, visiting 53 European ports. I wouldn’t be surprised if the crew included a naval band playing It’s a Long Way to Tipperary, along with repertoire composed by Japanese musicians.

The youth who sang the song in Sendai paired it with Home, Sweet Home (probably singing the Japanese lyrics), which had already become a perennial favourite. The combination only seems incongruous at first glance: the lyrics of It’s a Long Way to Tipperary are not in the least war-like; they are about being a long way from home – which soldiers at war, of course, usually are. By now the song is associated with two world wars, but far from glorifying war, one might say it represnets a powerful reminder what they have lost (at the very least temporarily) for those who participate in it.

Meanwhile, three months after the Sendai concert, in 1916 in the naval battle of Jutland, 26 survivors of the wreck of the Tipperary were reportedly recognized and rescued, when they sang, ‘It’s a long, way…’ It is hard to beat this conjunction as an illustration of music’s power as a force of global integration. I feel that there’s something curiously moving about students in Sendai joining in a kind of global chorus, as it were. – Did the singer in Sendai see battle? Given Japan’s history of increasing military aggression over the following years it seems all too possible…

And while I don’t know how popular (or not) the song is in Japan now I did find a recent upload on Youtube:

Although I grew up in a (mostly) pop music free home, the name Katja Ebstein was familiar to me. Born in 1945, she was a...read more →