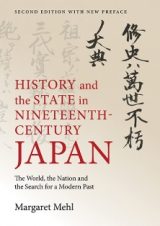 From the “PREFACE TO THE NEW EDITION” of History and the State in Nineteenth-Century Japan: The World, the Nation and the Search for a Modern Past

‘Historians place the highest value on monographic research, based on the archives.’

‘We historians, I often think, tend to stop too soon, when we might continue our interpretive work until it reaches for more general conceptions.’

Why am I publishing a new edition of History and the State in Nineteenth-Century Japan, a book with a narrow focus on a single institution over a period of less than thirty years (1869–95)? History and the State deals with the Historiographical Institute at the University of Tokyo (Tôkyô Daigaku Shiryô Hensanjo) and its predecessors; well might one argue that I clearly stopped ‘too soon’ when I could have continued to work out the wider implications of my research on history and the nation state. Why have I nevertheless decided to publish the work with little more than cosmetic changes to the original edition?

My aim in this preface is not just to explain my motives, but also to share some of my reflections upon my work as a historian, especially the dilemma faced by many historians and phrased so well in the observation by Carol Gluck quoted above. Re-reading History and the State I feel that back in the 1980s and 1990s I made some effort at interpretation and that, as I reached for general conceptions, I even arrived at a few tentative generalizations. Ultimately though, I timidly hinted at what I now feel I might have boldly explored. I am not sure I regret this. I finished my Ph.D. thesis in what by German standards was fairly good time (around four years) and moved on to new projects. My next book, Private Academies of Chinese Learning in Meiji Japan, was on a subject largely, although not entirely, unrelated to historiography. Meanwhile, other scholars have produced work that now enables me to approach the subject of History and the State in a way I could not have done back then. So rather than revise the old book, I use this preface to outline some broader implications that might be explored further by the next generation of scholars.

On a superficial level, the answer to the ‘why re-publish’ question is easy enough: in June 1999, while on sabbatical in Tokyo, I applied for an academic post at the University of Copenhagen. Applicants were required to send in copies of their publications, so I duly attempted to purchase extra copies of History and the State (published the previous year), only to find that, apart from a copy in one of the second-hand bookstores in Kanda at a price I was not prepared to pay, there were apparently none to be had, at least not before the application deadline. Believing that under the circumstances I could hardly be blamed for copyright infringement, I borrowed the book from the Waseda University Library and had it copied at the Sôbisha print shop nearby.

Next time I checked, I found that History and the State indeed appeared to be out of print, and some years later I found that it was available from the publisher (which had now become Palgrave Macmillan) or from Amazon through ‘print on demand’ or as an ‘e-book’ (meaning a pdf-file). Of course, authors do well to keep track of what happens to their book after it has been published. Young academics, however, quickly learn not to expect too much from their publications, beyond, if they are lucky, the next step up the career ladder. Besides, in my early years in the profession, I was too busy teaching new courses and writing my next book.

Meanwhile, the digital revolution was transforming book publishing. A few years into the new millennium, I realized that print-on-demand and e-books had become so easy and cheap to produce that they offered new opportunities for authors as well as publishers; more precisely, they offered opportunities for the author-publisher. Following helpful advice from the Society of Authors, I asked Palgrave Macmillan for the reversion of the rights to History and the State, which they graciously granted. History and the State was now mine to do with as I liked, and I decided to re-issue it myself in order to retain full control over my work.

Full control means full responsibility, and so I feel I owe the reader an explanation for the decisions I have made.

My main reason for re-issuing the book is my belief that History and the State, despite its narrow focus, represents an important contribution to broader discussions relating to nation-building in the nineteenth century (and beyond), to the role of the past in creating national identity, as well as to the development of history as a modern academic discipline, which is so intimately linked to the formation of the nation state that to this day historians can struggle to overcome methodological nationalism. I will return to this point later.

My confidence in History and the State as a useful contribution to scholarship has been further strengthened by the fact that a team of Japanese historians led by Chiba Isao and Matsuzawa Yûsaku have been working on a Japanese translation of the work for the last few years. In the draft of his postscript (kaisetsu), Matsuzawa describes History and the State as unique in its comprehensive and detailed treatment of official historiography by the Meiji government. Apparently, although several books and articles relating to aspects of historiography in modern Japan have been published by Japanese scholars since I completed my research, none of them provides a similarly comprehensive treatment, much less attempted to place official historiography into a comparative perspective.

The Context: Writing about Historiography in Meiji Japan in the 1980s         xii