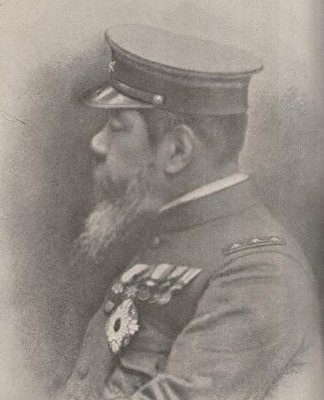 Japan’s victory over Russia in 1905, although won at great cost and, one might say, by the skin of their teeth, represented a great triumph and gave rise to an upsurge in nationalism. By 1905 many Japanese were too young to remember the time of their country’s humiliating weakness in the face of the dominant Western powers, the senior political and military leaders from Satsuma and Chôshû, remembering the attacks both domains had suffered in the 1860s, must surely have felt more than highly gratified.

Meanwhile, as his reign matured and Japan went from strength to strength, the person of the emperor Mutsuhito seemed to retreat more and more behind the image of the sovereign. He no longer travelled as much as he had done before 1889; his last major tour had been back in 1885. Instead, copies of a likeness from the hands of the Italian artist Cloisonné (for the emperor hated being photographed) were circulated. Showing a handsome man in his prime, his military uniform decorated with medals, his sword in his hand, his white-plumed cap on a table beside him, Emperor Meiji’s portraits adorned the walls of consulates, ministries, regional offices and schools.

How did he feel about his life? He rarely displayed his feelings, much less recorded them in writing. Only once, in July 1883, when Iwakura Tomomi, one of the members of the court who played a leading role in the Restoration died, did the emperor express his feelings openly in a written tribute: “I ascended the throne when I was still a child. I depended on him completely for guidance, and I imbibed the wisdom he unstintingly gave me. The kindness of my teacher was the same as a father’s. Heaven did not spare him; how can I overcome these feelings of bitter grief.” Otherwise, the only hints we have are in highly stylised form in his poems: 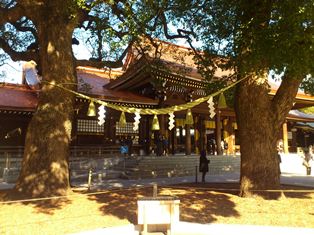 Main Hall of Meiji Shrine, Tokyo (photo by the author)

A day that is

Listening only to the sound

Of the summer rain –

How depressing it has been,

Even within the palace.

Although conventional in style, this poem may well express the emperor’s feelings in one of his phases of despondency. Another poem perhaps expressed his anxiety on the eve of the Russo-Japanese War, although only indirectly:

This year, too, when

There are so many problems

It is not surprising

The voice of the song-thrush

Is so longingly awaited.

Foreigners for the most part saw only the image, rarely the person. A rare glimpse of the emperor as a human being appears in a letter written by the British minister to Japan, Sir Claude MacDonald, at the time of the Russo-Japanese war; according to the minister, the emperor “chatted most amicably with everybody all around”, and Itô Hirobumi’s jokes “made this direct descendant of the Sun roar with laughter. It was a great revelation to me and one which pleased me very much for, though a Mikado, he seems very human.”

Emperor Meiji’s stoicism and his sense of duty prevented him from betraying any stress he may have felt. Perhaps his weakness for drink, Japanese sake in his younger days, Western wine and champagne as he grew older, resulted from the pressures he was under. He also experienced periods of despondency and mysterious illness, possibly depression, during which he, quite uncharacteristically, neglected his duties; during the Satsuma Rebellion in 1877 and again in 1885, when preparations for the constitution were in full swing. His statesmen were letting off steam by dancing at the Deer Cry Pavilion (Rokumeikan), but for the emperor himself attending a ball was below his dignity. He even deprived himself of regular visits to his home town, the ancient capital of Kyoto, even when his personal physicians urged him to spend some time there for the sake of his health. When the imperial household minister expressed his concern, the emperor got angry and said, “I did not reject the chief physician’s advice without good reason. Kyoto is my old home, a place I have always loved, as you know. But just because I love the place, is it right to take a vacation there? It may be good for my health, but what will happen if state business falls hopelessly behind because I am not here?”

Apart from his profound sense of duty, however, Emperor Meiji was perhaps at heart a very ordinary man with no extraordinary talents. Contemporaries praise his memory, but give little evidence of it being unusually good. He was not intellectual and never spent more time than he could help on his formal studies, which lasted until he was 30. A certain passivity seemed to characterise him; maybe his refusal to take any political initiative owed just as much to his passive nature as to his ideas about the role of a constitutional monarch. Although he sometimes showed an aversion to being directed by others, he usually followed the advice of those around him. His strength, it seems, lay in bearing, rather than acting. Yet he was by no means lazy; many are the testimonies of his dedication to his office and his sense of duty. In this he reminds one of his contemporary, Kaiser Franz Josef of Austria.

His greatest achievement was that he was there, that he reigned for so long. Thus, like Queen Victoria, he acquired a reputation of greatness that would never have been his, had he died young.

When he did die, on 30 July 1912, it came as a shock to many Japanese (his last illness had been kept secret). His person was closely associated with modern times, and his death felt like the end of an era (see Emperor Meiji 1). 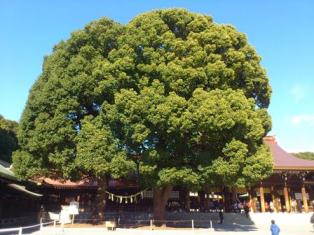 The press, Japanese and foreign, found strong words of praise for the departed monarch. In London, where a performance of The Mikado was cancelled on the day of his funeral, the Daily Telegraph wrote: “In the history of civilisation there is nothing more wonderful than the evolution of this island kingdom.” In Vienna, a newspaper comment went even further: “Proudly Emperor Mutsuhito might say that he had created a great power out of nothing in one generation.”

By 1912, some of the costs of Japan’s spectacular rise were apparent; political instability, as politicians grappled with the new parliamentary system; the social problems resulting from agrarian poverty and industrialization; the first serious case of environmental pollution. But Emperor Meiji, untainted by the less savoury sides of modernisation, symbolised modernity in the best sense of the word; the railways, constitutional government, industrial progress and an empire won. Just as his portrait by Cloisonné showed him in his prime and preserved his image untouched by age; so, uncontaminated by the era’s ills, associated only with its triumphs, his sacred authority lived on in the memory of his people. 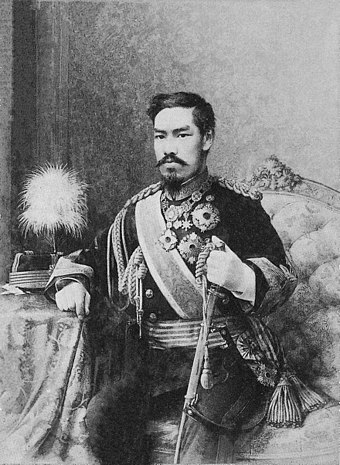 The famous portrait by Cloisonné (Wikiwand)

For Photographs of the Emperor’s funeral (13 September 1912):

The Meiji Emperor was only sixteen when the Restoration of 1868 ended the rule of the Tokugawa shoguns and established the imperial court as the...read more →