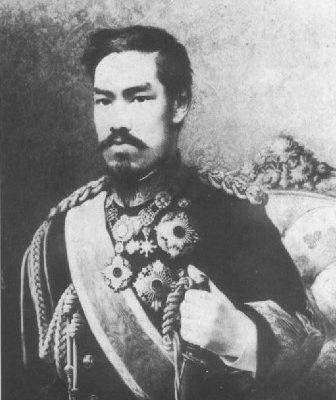 The Meiji Emperor was only sixteen when the Restoration of 1868 ended the rule of the Tokugawa shoguns and established the imperial court as the supreme authority. Personal rule by the emperor remained the ideal, but in fact around 20 men from the nobility and the domains involved in the overthrow of the shogunate, often called the Meiji oligarchy, exercised the actual political power in the central government. Within a few years, the government was centralized, a system of taxation, military conscription and compulsory education were introduced. Many religious and social traditions persisted, but gradually, people’s lives changed.

Of all Japanese, perhaps none saw greater changes in their personal life in the first years of Meiji than the emperor himself. For centuries Japan’s emperors had lived in virtual seclusion in the palace, in a world of their own, not involving themselves in affairs of state. The foreigners in Japan hardly realised he existed; neither did the majority of the Japanese people. Then emperor Kômei became involved in politics over the foreign issue, and now his son found himself at the head of a new government, which did everything in his name. He had to meet strangers, even foreigners. Sir Harry Parkes and A.B.Mitford, probably the first foreigners to set eyes on him, in an audience a week after the proclamation of the Five Point Oath, saw “a tall youth with a bright eye and clear complexion; his demeanour was very dignified, well becoming the heir of a dynasty many centuries older than any other sovereignty on the face of the globe.” Dressed in white and red with a black headdress, his eyebrows shaved, his face painted, his teeth blackened, he “hardly spoke above a whisper, so the words were repeated by the Prince of the Blood on his right side and translated by Itô Shunsuke [Hirobumi].” It took a few years for Meiji to learn the etiquette of associating with foreign dignitaries, shaking their hands, smiling, talking about suitably noncommittal subjects.

Moreover, the emperor travelled; first, in April 1868, to Osaka, next, in November that year, to Tokyo, where he resided permanently from 1869, and then throughout the country. He completed 102 excursions in the 45 years of his reign, including six long ones, lasting from 40 to 70 days. The first one, in July and August 1872, took him to the area around Kyoto and to the islands of Shikoku and Kyushu, mainly by boat. In 1876 he ventured north-east, into parts of Japan which, in ancient times when his ancestors ruled supreme, barely belonged to the realm; borderlands inhabited by little-known Barbarian tribes. With him went 230 people; statesmen, official historians, chamberlains and physicians. The emperor watched peasants planting rice seedlings, inspected local produce, newly opened farmlands and factories and listened to local governors explaining the geographic and economic conditions of their region ought to pupils in the new schools reciting. At one elementary school in Aomori, the programme of English speeches and compositions ran thus:

Composition: In celebration of His Majesty’s visit to Aomori.

Composition: A song in praise of enlightenment and progress.

Composition: A song in praise of education.

Continuing north, he finally reached Hakodate on the island of Hokkaidô. When he toured the hospital, scientists were in the middle of an experiment on a toad’s blood circulation, and Meiji had his first chance to look through a microscope. An exhibition of local wares at his lodgings included Ainu utensils and clothes, and later more than 50 Ainu (the indigenous people of Hokkaidô) came and paid their respects.

Emperor Meiji also visited places of historical interest during his tours: in Hakodate he climbed the ramparts of the Five Point Fortress, where the last battle against the Restoration army had been fought seven years earlier. The Five Point Fortress in Hakodate today (by the author)

The emperor thus got to know his realm better than any of his predecessors, and the people became aware of the imperial presence, even if they seldom caught more than a glimpse of him as his closed carriage passed. He identified himself with Japan’s efforts to establish a “strong army” when he attended manoeuvres and a “rich country” when he examined the local products and the early evidence of industrialisation. He demonstrated his support for “civilisation and enlightenment” when he inspected the modern schools and, later, attended the yearly graduation ceremonies at the Imperial University of Tokyo. His tours certainly tested his endurance. He travelled for long hours in a cramped carriage or palanquin, often on bad roads; he braved the June rains and the August heat; lodging in the private homes of local dignitaries, he followed rigorous schedules that left him no time to himself. But he bore it all with great stoicism and from a strong sense of duty which characterized his adult life.

The Meiji Constitution finally made his imperial powers were finally made legally explicit. Proclaimed on 11 February1889, on the legendary anniversary of the accession of the first emperor, Jimmu, in 660 B.C., the constitution described the emperor as belonging to a line “unbroken for ages eternal”, as “sacred and inviolable” and as “the head of the Empire, combining in Himself the rights of sovereignty” and exercising them “according to the provisions of the present Constitution”. The constitution gave him the power to convene, open, close and discontinue the imperial Diet, dissolve the House of Representatives, issue imperial ordinances “in place of law”. It empowered him to command over the army and navy, to declare war, make peace and conclude treaties. He, not the Diet, appointed the ministers. As so often with laws, however, the constitution only tells us half the story. Emperor Meiji did not in fact reign as the absolute monarch the constitution appeared to make him. In day-to-day government, other stipulations by the constitution, seemingly contradicting the notion of absolute rule because they limited the imperial prerogative, determined who actually govern the country. The ministers responsible for advising the emperor formulated government policy themselves. The emperor’s advisors wrote the imperial ordinances, which ultimately needed the approval of the Diet and could not alter existing laws. The supreme command over army and navy in practice lay with the chiefs of staff. The emperor, who in any case lacked military training, merely sanctioned their decisions. Meiji himself saw his role as that of a constitutional monarch, leaving the initiative in handling state affairs to others and not acting against the advice of the statesmen that surrounded him.

All the same, he was no mere figurehead. The chamberlain of the King of Hawaii who visited Japan in 1889 as the first foreign monarch observed that Emperor Meiji’s eyes seemed to say that he was definitely not “one who would put himself entirely in the hands of his ministers.” The emperor often made known his opinions about government appointments, and although they were sometimes ignored, often they were heeded.

Even if he did not himself assume command of his troops, the emperor wanted to be close to them, when the war with China broke out in 1894. He moved his headquarters to Hiroshima, the point of embarkation, and spent the next eight months there. The newspapers reported that he was sharing the privations of his soldiers. Even the Empress travelled to Hiroshima and visited the wounded in hospital. During the second war of the Meiji period, however, the Russo-Japanese War of 1904 to 1905, Emperor Meiji presented a very different image to his people. His headquarters remained in Tokyo, and he presided over many an imperial conference, the statesman gravely concerned with the peril of his people. He reacted with restraint to the reports of Japan’s great victories at Port Arthur and Mukden; but when Japan won the war, he travelled to Ise to report the victory at the shrine dedicated to Amaterasu, the sun goddess and legendary ancestress of his house and the whole nation. In the eyes of his people, he had won the victory, only the second by a non-white nation over a Western power (the first being Ethiopia victory over Italy in 1896). His name symbolised the rise of the Japanese empire, and he stood at the zenith of his reign.