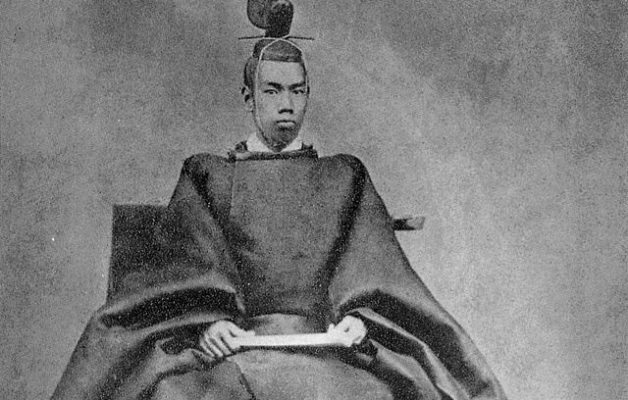 The Reiwa era will begin on 1 May when the present crown prince Naruhito succeeds his father Emperor Akihito who will finally be granted his wish to abdicate. In former times it was quite common for emperors to abdicate, but the present emperor is the first to do so in 200 years. Given that the emperor of Japan is not the constitutional head of state, his abdication is unlikely to become a major historical turning point, not even with a new era name. At best, the beginning of the Reiwa era might work as a kind of psychological ‘reset’, as the media have been dubbing the change, but few Japanese are likely to feel they are experiencing a momentous event.

Things were very different when the Meiji 明治 era in 1912 ended. For a start, the Meiji era had been unusually long. After the Restoration of 1868 it was decided for that the era name would from now on coincide with the reign of the emperor and become the posthumous name of that emperor. Until then it had been quite common for the name to be changed in the course of an emperor’s reign. The Meiji emperor reigned for nearly 45 years, so the era named Meiji lasted for longer than any other before it.

The emperor’s end came fairly suddenly, at least for most of his people, for the general public only heard about his grave illness some ten days earlier. His death on 30 July 1912 did indeed seem like the end of an era. Nearly everyone agreed on this, and some well-known writers expressed the general feeling. The author Tokutomi Roka wrote:

“When the emperor dies the era name also changes. […] I knew this perfectly well, but still I felt as if the name of Meiji would continue forever. I was born in October of the first year of Meiji, the year when the Meiji emperor ascended the throne and of the month when he first went from Kyoto to Tokyo. […] I am accustomed to thinking of Meiji’s age as my own, and being the same age as Meiji has been both my pride and my shame. The emperor’s death has closed the book of Meiji history. When Meiji became Taishô, I felt as if my life had been broken off.”

Another writer, Natsume Sôseki, let one of his fictional characters say, “the spirit of the Meiji era had begun with the emperor and had ended with him.” Emperor Meiji’s death became a mass media event, the newspapers reporting on acts of mourning throughout the country, and reinforcing the outpour of popular affection.

How different from the era that the future emperor was born into in 1852, or Kaei嘉永5. Two years later, in 1854, when Commodore Perry and his gunboats had come and gone, the era name was changed to Ansei 安政, meaning something like ‘peaceful government’ – surely an instance of wishful thinking if every there was one, for the Perry’s arrival spelt the beginning of the end of both the rule of the shoguns and the ‘Tokugawa peace’ that had lasted for over two centuries.

Even in the turbulent years following Perry’s arrival, life at the palace continued at a slow pace. Far more than the arrival of a Russian fleet and the threat of Perry’s return, the life-threatening illness of the baby prince gave cause for concern. Doctors prescribed traditional Chinese remedies with names like “purple snow”, priests prayed at shrines and temples, monks chanted sutras, yin-yang diviners twanged their bows. The little prince recovered, but in the following years Emperor Kômei had many an occasion to worry about his son’s health rather than the political situation. Imperial princes and princesses died appallingly frequently, even given the generally high infant mortality at the time. Only three of the thirteen children of Kômei’s father Ninkô lived to see their third birthday; of Kômei’s own six children only the future Meiji Emperor survived him, although Kômei died young. Of Emperor Meiji’s fifteen children only five reached adulthood. No one knows why. Life in the gloomy confines of the palace, medical care which relied on superstition and prayers rather than on scientific knowledge, the fact that their parents were married in the early teens, the limited choice of marriage partners for an imperial heir, promoting inbreeding; perhaps also the custom of separating imperial children from their parents to have them brought up by strangers, all these may well have stifled the ability to live in all but the most robust babies.

In the outside world the shogun battled with the foreigners’ demands. Inside the palace grounds, Kômei had a “Pavilion of Listening to the Snow” built, where he could relax and compose poetry. That same year, 1857 and Mutsuhito’s sixth, the prince too composed a poem, the first of 100 000 short poems he wrote in his lifetime. Meiji’s formal education began in 1859 with calligraphy, reading the Confucian classics and composing poetry, which his father corrected. Although officially proclaimed crown prince the following year, no-one deemed it necessary to teach the future ruler anything more practical.

How much did the young prince notice and understand of the events in Kyoto in the 1860s, when the ancient imperial capital once again became the centre of political activities? Loyalists, shogun’s officials and feudal lords vied for influence at the imperial court, violence increased, and even members of the court nobility took part in the struggles. Kômei, more involved in political affairs than any emperor in the last 200 years, wrote a concerned letter about his son’s education, which hints that the political climate did not leave young Meiji untouched: “[…] Sachinomiya [Meiji] had become unpleasant toward me and is more than I can cope with.”

Unlike those who called for the restoration of imperial power, Kômei believed in the existing dual system, in which the shogun derived his power from the emperor. But he himself, like the system he knew and supported, had not long to live. Early in 1867, only days after having confirmed Yoshinobu as the new shogun, Kômei fell ill and died. About the circumstances of his death the British diplomat Ernest Satow remarked that he heard no suggestion of foul play at the time, but that it was “impossible to deny that his disappearance from the political scene, leaving as his successor a boy of fifteen or sixteen years of age was most opportune.”

The opponents of the shogunate seized their chance. Within months they persuaded Yoshinobu to resign and staged the palace coup that formally restored all political power to the emperor. His main preoccupation, meanwhile, was his bride. The choice fell on Haruko; of impeccable pedigree, in excellent health and highly accomplished in scholarship and the arts, including music, tea ceremony and flower arrangement, she would play a more public role than any imperial consort since ancient times. The wedding ceremony could not take place until January 1869, when the political situation had stabilized somewhat.

The restoration proclaimed in the name of Emperor and the reforms enacted in the first few years of the newly-named Meiji era would eventually change the lives of all Japanese. Not that this was obvious from the start, although the new emperor’s proclamation of the so-called Five Point Oath sounded promising enough. Reading of the imperial oath (website of Meiji Shrine)

This took place on 7 April 1868, in the Hall of Ceremonies in the imperial palace at Kyoto. The Shinto ceremony, witnessed by a gathering of nobles, lords and officials dressed in colourful court robes, began with the purification of the hall by sprinkling salt water and scattering rice. The Head of the Office of Shinto Worship chanted a special song for the descending gods and made an offering. Then the emperor entered the hall together with his two assistant presidents, Sanjô Sanetomi and Iwakura Tomomi, two ministers of state and other dignitaries. The emperor took his place on the throne and Sanjô read aloud a Shinto prayer, invoking the gods of heaven and earth. The emperor rose, bowed before the altar and offered white and red cloth on sprigs of sacred wood. Then Sanjô read the following five articles:

Item. We shall determine all matters of state by public discussion, after assemblies have been convoked far and wide.

Item. We shall unite the hearts and minds of people high and low, the better to pursue with vigour the rule of the realm.

Item. We are duty bound to ensure that all people, nobility, military and commoners too, may fulfil their aspirations and not yield to despair.

Item. We shall break through the shackles of former evil practices and base our actions on the principles of international law.

Item. We shall seek knowledge throughout the world and thus invigorate the foundations of this imperial nation.

After the reading of the document those present signed it and swore to obey the emperor’s wishes and do everything to implant the articles of the Oath. Later, nobles and lords who had not attended the ceremony added their signatures until a total of 767 had signed. Not the emperor himself, but two samurai wrote the Oath. One of the authors, Yuri Kimimasa, had met Sakamoto Ryôma, who visited him shortly before his assassination, and together they had discussed plans for a new political order. Indeed, the five points in the Oath closely resemble plans drawn up by Sakamoto Ryôma. The ideas the Oath expresses had by now been widely discussed and become accepted, but they still revolutionized traditional thinking about the state. Neither in Japan, nor in China had “public discussion” ever featured as a basis for political deliberations, much less the involvement of “low” classes in administration. “Evil practice” was not generally associated with the past. On the contrary: even the Meiji Restoration itself was justified as a return to the praiseworthy political system of ancient times. Moreover, seeking knowledge “throughout the world” had certainly not been in the mind of the loyalists who first called for a restoration of imperial rule. But then, as contemporaries expressed it, fukko 復古, the Restoration, soon turned into ishin維新, a renewal. The first government, modelled on the imperial bureaucratic system of the eighth century, made way for a constitutional monarchy following the example of the West, and this as well as other knowledge from “throughout the world” shaped the new order.

The renewal, Meiji ishin as the Japanese call it, is what the reign of Emperor Meiji is today remembered for. The very name of the era, although derived from a passage in the Chinese classic, The Book of Changes (I Ging), came to signify “enlightened rule” in a modern sense. The Meiji emperor and the era of his reign came to be associated with modern times in the brightest sense. Small wonder then its passing was felt to be a major turning point.