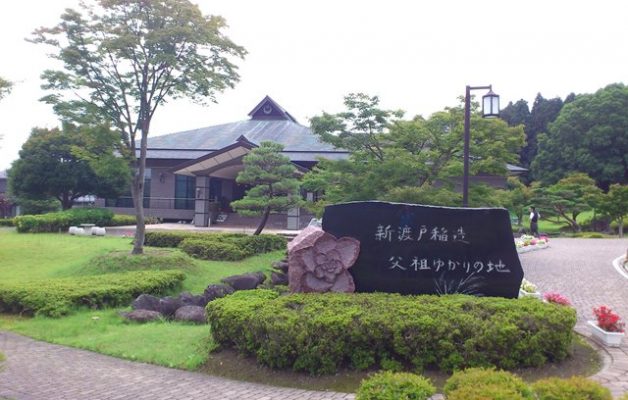 ‘Scratch a Japanese of the most advanced ideas, and he will show a samurai.’ (Bushido, p.89). Such is the essence of Inazo Nitobe’s (1862-1933) message in his most famous work, Bushido – The Soul of Japan. For his Western audience the book answered the question: How did the Japanese achieve what they did in the short time between Perry’s arrival in 1853 and the end of the nineteenth century? This one word, bushido, ‘the way of the warrior’, seemed to explain all. Published in English in1999, translated into German in 1901, Bushido became a bestseller, gaining a particular wide readership after the publication of the second edition in 1905, the year Japan won the war against Russia. 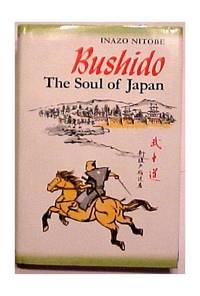 A Japanese from best samurai stock, a Japanese who moreover could explain himself and his country in excellent English, the author seemed to many readers eminently qualified for the task of explaining the real Japan to Westerners. Moreover, to Nitobe’s own surprise, his English original was soon translated into Japanese and became a huge success in Japan too.

And yet this definition of Japaneseness centring on the fighting spirit came from a Quaker, whom a tribute after his death described as a ‘warrior for peace’; who had received most of his education in English from foreign teachers and married an American Quaker; a man, who – for all his utterances on ‘manliness’ – did better as the president of Tokyo Christian Women’s University and as an agony aunt for women’s magazines, than as the principal of the First High School, that bastion of rough-necked manliness.

Nevertheless, it is Bushido that Nitobe is best known for; an early example of the many books written with the purpose of explaining Japan to Westerners, preferably with a single word or concept, as if any society could be summed up that easily. Nitobe discusses what he perceives to be the characteristics of bushido: rectitude or justice, courage, the spirit of daring and bearing; benevolence; politeness; veracity and sincerity; honour; loyalty; self-control; the institutions of suicide and redress, and the significance of the sword, which he calls, ‘the soul of the samurai’. Curiously, Nitobe cites almost exclusively Western authors and strives to find similarities with the West for individual characteristics of bushido – even when he discusses that seemingly quintessentially Japanese institution, hara-kiri or seppuku. He quotes Shakespeare, none less, who has Brutus say, ‘Thy [Cesar’s] spirit walks abroad and turns our swords into our proper entrails.’ (Bushido, p. 111; Julius Caesar, act 5, sc. 3, l. 94, according to Libquotes)

Nitobe claims that bushido, far from being the behavioural code of one social class, has spread to the entire population. Even so, in his last chapter, ‘The future of bushido’, Nitobe asserts that between Christianity and materialism there will be no more room for bushido, although it will always remain ‘alive as a virtue’.  And then he concludes with the words of an unnamed Quaker poet to illustrate in what way bushido will survive: ‘The traveller owns the grateful sense/ Of sweetness near, he knows not whence,/ And, pausing, takes with forehead bare/The benediction of the air.’ (Pp. 164; 193) Throughout the book, Nitobe’s Christian beliefs and his efforts to reconcile them with the moral precepts he learned in his young days are evident.

His upbringing, moreover, despite his samurai birth, hardly qualified him to know much about his own culture. By the time he reached his teens, the days of the bushi, the samurai, had passed. Indeed, the samurai were the first to embrace Western knowledge and values, often to the point of neglecting their background. Nitobe became one of the small group of men that has been described as the ‘masters of English’, because they were educated at the time of transition, when a Western education meant studying at one of the few government schools, where foreigners taught in English, forcing the young boys to acquire the language skills from an early age. Even so, Nitobe’s own background and childhood undoubtedly influenced his interpretation of bushido.

Born in 1862 in Morioka, 500 kilometres north of Tokyo, as the son of an advisor to the Lord of Namba, Nitobe came from a high-ranking samurai family from Japan’s rugged northern provinces, where the samurai spirit was reputed to be strongest. At the age of six he was formally initiated as a samurai and received his first sword. But before could complete the second part of his initiation at sixteen, the Meiji reforms swept away the old social system and deprived the samurai of their status. His father had died already in 1867, and the task of supervising his education was left to his mother and his uncle. In 1871, Inazô and his brother were sent to Tokyo, where he eventually managed to gain admission to the Tokyo School of English, the future preparatory department of Tokyo University. Instead of continuing to Tokyo University, however, he chose to enter the government’s new agricultural college in Sapporo, thus rejecting the preferred routes to influence through the study of law, politics or economics. In 1877, while his uncle and brothers joined the government’s troops marching south to suppress the Satsuma Rebellion, Inazô and his fellow students-to-be sailed north on a steamer chartered by the government. 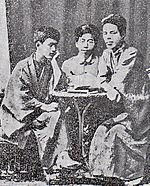 At Sapporo, with fellow-students Kanzo Uchimura and Kingo Miyabe (Wikiwand)

Like many of his fellow students, including Uchimura Kanzô, another of the ‘Masters of English’ who wrote successfully for a Western audience, Nitobe converted to Christianity while at Sapporo Agricultural College. After their graduation in 1881 Nitobe and his comrades had to work in the Hokkaido Development Office in return for their free education. But Nitobe quit already in 1883 to study English literature and Economics at Tokyo University. His most fervent wish was to study in America, and in whose language, culture and above all religion had so profoundly influenced him.

And so, with only a year’s worth of financial support, without a government commission or a clear plan of study of his own, he left Yokohama on 1 September 1884. His first destination was Meadville and Allegheny College, recommended to him by M.C. Harris, the minister who had baptized him. A provincial college was, however, hardly suited to Nitobe’s ambitions. He soon moved to Johns Hopkins University in Baltimore, where the support of a fellow student from Tokyo enabled him to participate in the famous research seminar of Herbert Baxter Adams, the director of the Department of History and Political Science. Completely out of his depth, Nitobe contributed little to the proceedings during his three years in Baltimore, although he spent hours in the library – when he did not have to work to pay his way.

In this discouraging situation Nitobe found moral support among the Quakers of Baltimore and Philadelphia. Johns Hopkins, although non-sectarian, was deeply influenced by the Quakerism of its founder. The Quakers’ simplicity and earnestness attracted Nitobe. He attended their meetings regularly and even participated actively and with much more eloquence than in the research seminars, speaking with passion about his home country and Japanese-American relations.

In 1887 Nitobe left Baltimore without completing his graduate studies, having been instructed by the Japanese government to study agricultural economics in Germany before taking up an appointment as assistant professor at Sapporo Agricultural College. In Germany, Nitobe spent his first year at Bonn University before moving to Berlin and then to Halle. There, after another semester at Bonn from October 1889 to April 1890, he received his doctorate, for a thesis in the field of agricultural economics about the use of land in Japan. In 1891, he began his distinguished teaching career by taking up his post at Sapporo.

First, however, Nitobe returned to Baltimore to marry Mary Elkinton, the daughter of a prominent Philadelphia Quaker. He had been granted membership of the Baltimore Monthly Meeting of Friends before his departure for Germany. Nitobe even dedicated his doctoral dissertation to his wife, an unusual thing to do in Germany at the time.

In Sapporo, Nitobe not only taught his appointed subject, economics, but also English literature and Bible classes. In addition, he supervised the dormitory and two private schools and established a night school with volunteers from the College as teachers. The heavy workload took a toll on his health, and in 1897 his doctor advised him to give up his post at Sapporo and take a long break. The Nitobes and Mary travelled to California to recuperate, and during this time Nitobe wrote Bushido, the book which first won him international fame.