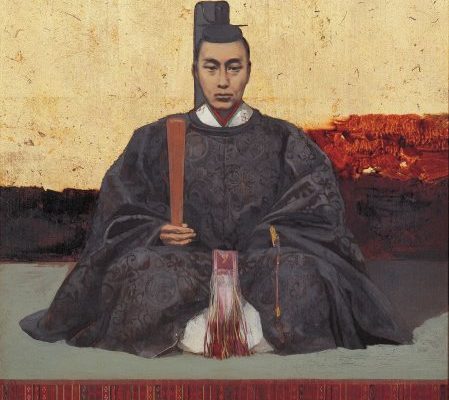 This year marks the 150th anniversary of the Meiji Restoration (明治維新 or Meiji Renewal in Japanese), dated from the proclamation of the restoration of political power to the emperor on 3 January 1868 (or the ninth day of the twelfth month of the fourth year of Keiô, according to the old lunisolar calendar, which continued to be used in Japan until 1873).  So, for my blogs this year, I have decided to introduce some of the Japanese men and women who are the subject of my draft manuscript for The Meiji Miracle, people who helped bring about the Restoration and shape the era known as Meiji, which lasted until the emperor’s death in 1968.

Part 1: The Last Shogun and the Fall of the Tokugawa Shogunate

Nearly fifty years after Sakamoto Ryôma’s death, another Restoration activist, Ôkuma Shigenobu, who, unlike Sakamoto, did grow old, “strolled through Koishikawa, where gentle elevations crowned with old pines and studded with elegant mansions presented an attractive sight.” Ôkuma was on his way to visit “a certain venerable nobleman” to ask him about his resignation from office, “a resignation that had paved the way to all our subsequent national honour and prosperity.” Kosihikawa Botanical Gardens are probably the most “attractive sight” in the area today (Source: Keihin Nike).

Koishikawa, in the north-western corner of central Tokyo, had once been occupied by the residence of the Tokugawa clan’s Mito branch. In the early 1900s it had become a residential area for professors and the solid bourgeoisie with a few temples and gardens, a bit of industry in the form of a printing centre. An arsenal covered most of the former Mito residence; only the garden still lay intact and not yet open to the public.

Here, not far from his place of birth in the Mito residence in November 1837, Tokugawa Yoshinobu, also known as Keiki, lived out his days. The last shogun survived the first modern emperor by sixteen months, dying in November 1913. He lived most of his life in retirement, in reclusion even. Not until his sixty-first year did he move to the capital, which during his short tenure as shogun he never set foot in.

Tokugawa Yoshinobu’s was not from birth destined to be shogun. He was born into the Mito branch of the house of Tokugawa-clan, and most shoguns came from the Owari branch. Much later, the so-called Mito School of thought was credited wtih having developed the ideology that brought the shogunate’s downfall. For Yoshinobu’s father Nariaki, however, reverence for the emperor did not prevent him from seeing loyalty to the shogun as his first duty. As he put it in 1842: “If the Shogun takes the lead in showing respect for the throne, the whole country will naturally be united, but it is vital that in this each should preserve his proper place. The samurai shows respect for his lord, the lord shows respect for the Shogun, the Shogun shows respect for the Emperor.” The shogun was not a usurper, but a legitimate ruler who derived his authority from the emperor.

But as foreign ships reached Japan’s shores more and more often, Nariaki’s views increasingly diverged from those of the shogun’s government. He opposed any concessions to the foreigners and built up coastal defences in his own domain.

Nariaki fathered 37 children, and of the twelve surviving boys several were adopted the houses of domain lords and families close to the imperial court. Yoshinobu, his seventh son, also became heir of another house; but his adoption into the Hitotsubashi family was special, ordered by Shogun Ieyoshi in 1847. In a state where supreme power lies with one clan, political history goes hand in hand with family history. So, if a shogun did not father a suitable heir, he had to adopt one from another family. Ieyoshi’s own father Ienari had come from the house of Hitotsubashi, a branch family of the Tokugawa. Ieyoshi’s surviving son and prospective heir Iesada, now twenty-three years old, was childless, of delicate health, and feeble-minded.

For Nariaki, the adoption meant the possibility of seeing his son become shogun and of increasing his own influence. He had made a point of having his son educated by his best scholars and martial arts teachers. Watching the five-year-old Yoshinobu he had observed: “He could become a splendid shogun; but if things didn’t go well, it could be too much for him.” In retrospect these words seem prophetic.

Iesada, however, did live long enough to succeed his father, but he became shogun at the worst possible time for the shogun’s office to be filled by a weakling: in 1853, in the middle of the turmoil created by Perry’s arrival. The shogunate had to face up to the fact that the foreigners, whose ships had appeared with increasing frequency on Japan’s coasts in the last decades, would not go away. Other nations followed Perry’s example, putting pressure on Japan to conclude treaties with them. The shogun had little room for manoeuvre, being caught between foreign demands and the conflicting views of his own officials, the most powerful lords and the emperor, who insisted that the barbarians be expelled.

In 1858, Shogun Iesada, still childless, fell gravely ill. The most obvious successor by blood and tradition was Iemochi of the Kii branch of the Tokugawa. Unfortunately, he was only twelve years old, and the last thing the country needed was another weak ruler. A struggle for succession followed, with Yoshinobu, now twenty-one, proposed as the alternative candidate.

Nevertheless, it was Iemochi who became the next shogun. Ii Naosuke, appointed regent that same year and favoured the weaker candidate. By acting like dictator, he hoped to restore the authority of the shogunate. He had the shogunate ratify the Treaty of Amity and Commerce with the United States in 1858, and brutally suppressed all opposition in the infamous “Ansei purges”. But with his brutality he made many enemies, and in 1860 Ii was assassinated by a group of samurai from Satsuma and Mito domains.

The shogunate was weakened further. Its officials tried to reassert the shogun’s authority by strengthening its ties with the imperial court: in 1862 Shogun Iemochi was married to the emperor’s younger sister, Kazunomiya. With backup from the court, the shogunate managed to purge Kyoto of anti-shogunate loyalists, in particular radicals from Chôshû domain, Satsuma’s rival. But the fact remained that the emperor wanted the foreigners expelled, while more and more actors realized that it could not be done.

One of them was Tokugawa Yoshinobu. He and his father Nariaki had been kept under arrest by Ii Naosuke, but his assassination brought their rehabilitation. Appointed guardian to the young Iemochi, he worked to reform the shogunate, to improve relations with the imperial court and to reach a compromise on the question of the foreign treaties. He needed, however, the cooperation of at least some of the powerful lords, and negotiating with lords on an equal footing did not belong to a shogun’s repertoire. For 200 years, the shogunate had ruled supreme. The lords, on the other hand, now began to think of a strong shogunate as something they could well do without. The shogunate’s failure to keep the foreigners out served as a convenient excuse for opposing the shogun and, eventually, plotting to overthrow his government.

In the capital the anti-shogunate loyalists of Chôshû gained strength once more. Chôshû now had the backing of its new ally, Satsuma – thanks to the achievements of Sakamoto Ryôma and his associates. In vain the shogunate’s forces tried to put Chôshû in its place. It was a fiasco, and in the middle of it, in summer 1866, Shogun Iemochi died. This time no real alternative to Yoshinobu presented itself.

Still, Yoshinobu was none too keen on the job, which was unattractive to say the least: there was the Chôshû fiasco; there was conflict over the scheduled opening of Hyôgo port; and the shogunate’s administration badly needed reforming if it was to survive. When he finally accepted, he surely knew that his opponents planned to put him out of business. The last shogun liked photography. In 1867 he had himself photographed in a French uniform. (Source: Wikimedia)

For a while, his efforts to shore up the shogunate seemed to succeed: he embarked on political reforms, advised by the French envoi Léon Roches. He strengthened his hold over the Tokugawa lands and modernized the shogun’s army. He had the support of Emperor Kômei.

The emperor, however died early in 1867. He was only thirty-six, and his heir only fifteen. His unrealistic insistence on expelling the foreigners caused the shogunate embarrassment. His belief in the cooperation between shogunate and court, however, gave the shogun legitimacy. So convenient was his untimely demise for the shogun’s enemies, that he was rumoured to have been poisoned.

Who would rule Japan now? Many of the lords were not interested in a strong shogunate. They wanted more influence for themselves. No single house, however, possessed the strength to grasp the supremacy. Men from the major domains in the South West of Japan schemed to restore power to the court. In October 1867, the lord of Tosa urged the shogun, to resign. He suggested that the emperor would establish a council of lords.

Yoshinobu formally returned his powers to the emperor on 9 November. His motives have been subject to much discussion; whether he thought this might actually strengthen his position, whether he was under pressure from the court, or whether he believed that the only way to survive the threat of foreign intervention was to restore centralized political power to the imperial court. Apparently, he had heard of an impending coup, but he took no action.

Tokugawa Yoshinobu has asked that the administrative authority which had long been commissioned be restored and wishes to resign from the office of Shogun. His proposal is now accepted. Since the year of the Water-Ox [1853] the country has been threatened by incomparable dangers, with which, as is well known, the late Emperor had seriously occupied himself. An imperial decision has now been made to recover political authority with a view to regaining national dignity. […] .

So ended rule by the shoguns after nearly 700 years and that of the Tokugawa after just over 250 years. (To be continued)