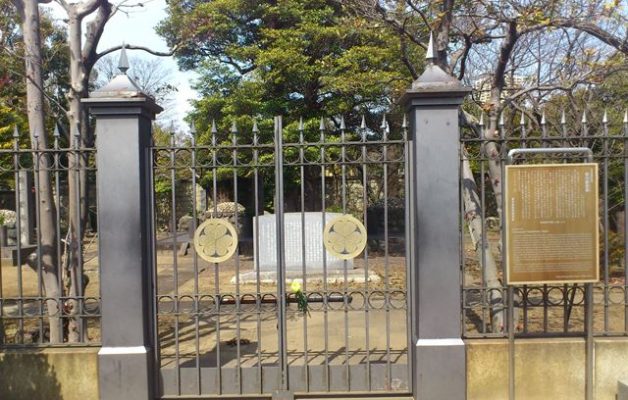 This year marks the 150th anniversary of the Meiji Restoration (明治維新 or Meiji Renewal in Japanese), dated from the proclamation of the restoration of political power to the emperor on 3 January 1868 (or the ninth day of the twelfth month of the fourth year of Keiô, according –the old lunisolar calendar, which continued to be used in Japan until 1873).  So, for my blogs this year, I have decided to introduce some of the Japanese men and women who are the subject of my draft manuscript for The Meiji Miracle, people who helped bring about the Restoration and shape the era known as Meiji, which lasted until the emperor’s death in 1968.

Earlier this year, I had the opportunity to hear at a symposium in San Francisco a lecture by Tokugawa Iehiro, current (19th) heir to the main Tokugawa house. He had given it the title, “The Meiji Restoration in the Longer Cycle of Japanese History”. Speaking freely in impeccable, idiomatic English, he surprised his audience by referring to a “Restoration to Toyotomi Japan”, thus emphasizing the significance of Toyotomi Hideyoshi (1537-98), the second of the three unifiers of Japan at the end of the 16th century. The third was, of course, Tokugawa Ieyasu, appointed shogun in 1603. It is true that he and his heirs built their political system on the foundations of created by Toyotomi. The result brought peace and stability to Japan for a good 200 years.

By the mid-19th century, however, Tokugawa rule was crumbling both under internal tensions and external pressures. The overthrow of the Tokugawa shogunate, although not without violence, went ahead more smoothly than it might have done.

Tokugawa Yoshinobu himself went quietly. A few days after the palace coup, 7 January he left Kyoto. The British diplomate Ernest Satow, standing among those who watched his return to Ôsaka castle, later remembered, “We took off our hats to fallen greatness. He was muffed in a black hood and wore an ordinary war-hat. What could be seen of his countenance looked worn and sad.” Satow saw him again the next day, when he accompanied Sir Harry Parkes to an audience: “One could not but pity him, so changed as he was from the proud, handsome man of last May. Now he looked thin and worn, and his voice had a sad tone.”

The deposed shogun may not have wished to fight, but others did. At the end of January, Yoshinobu’s troops fought and lost against the imperial forces at Toba and Fushimi, between Osaka and Kyoto. Hearing about the disastrous defeat, Yoshinobu fled from Osaka by boat in the night. In his haste, he left behind the commander’s standard that Tokugawa Ieyasu had carried into his decisive battle at Sekigahara in 1600. His loyal retainer Shinmon Tatsugorô with his band of men risked his life to salvage it from the castle and, having missed the boat, carried it all the way to Edo overland.

The court used Yoshinobu’s flight as a pretext to declare him a rebel. The imperial troops marched towards Edo, meeting little resistance on the way. As they marched, they sang “Tokoton’yare”, composed during the battles at Toba and Fushimi:

That’s the brocade pennant given me with the command, “Conquer the chôteki, the enemy of the court!” Don’t you recognize it?

The fame of this song even reached England, where in 1885 Gilbert and Sullivan incorporated the melody as “Miyasama, miyasama …” into The Mikado.

In Edo, Yoshinobu vacillated between asserting his authority and submitting to the imperial army. Finally, on 4 March, he left Edo castle and retired to a temple in Ueno, in the northern part of the city, leaving others to negotiate the surrender.

No-one, except a few determined samurai, who fought to the last, wanted a civil war, and the former shogun received generous treatment. He had to retire, but his successor as head of the house, Tokugawa Iesato (Yoshinobu’s adopted son), retained vast lands, and all Tokugawa vassals who swore allegiance to the imperial government received pardon.

The last battles of the Restoration wars were fought in the North-East, where the samurai of Aizu resisted to the end. Even then a small band under Enomoto Takeaki fled to Hakodate on the northern island of Hokkaidô and held out until the summer of 1869.

Yoshinobu, meanwhile, retired; first to his late father’s lands in Mito, where, according to Ernest Satow, he spent his time writing poetry, then to the Tokugawa lands granted him in Shizuoka, where he lived quietly for the next thirty years.

A certain amount of mystery surrounds the last shogun, and he has not found many biographers. His actions appeared contradictory, sometimes resolute, sometimes weak; his final days in Osaka and Edo were characterised by vacillation.  Even contemporaries varied in their estimation of him; but many of them, both Japanese and foreign, expressed admiration for him.

“He could become a splendid shogun; but if things didn’t go well, it could be too much for him.” So his father had said long ago, and, had the times been different, Yoshinobu would surely have proved himself a very able ruler. But an able administrator in times of peace and stability does not necessarily possess the skills required to provide real leadership and manage change when the old certainties crumble, to act resolutely when required, but also to master the give and take between strong individuals competing for influence.

Still, even if his actions as shogun can be explained by his character and the difficult circumstances he found himself in, his behaviour after relinquishing his powers is hard to fathom. He retired at thirty-two, in full vigour, at the age when a man might expect to perform some of his best work. Although he could not know it, more than half his life still lay before him. He spent it pursuing his hobbies; manly ones like falconry, hunting, riding and archery; but also painting, sketching, poetry, Japanese classical drama, photography, board games, collecting foreign clocks and even embroidery and baking.

The retired Shogun displayed little or no concern for his former retainers, many of whom lived nearby. It is said that when he was told of the death of his loyal follower Shinmon Tatsugorô in 1875, the same man who had saved Tokugawa Ieyasu’s standard from Osaka Castle, his expression changed only briefly.

Other followers of the former regime achieved success under the new order. Even Enomoto Takaaki, leader of its last stand in Hakodate, joined the new government after only a short spell in prison; first as a member of the Hokkaidô colonization board, later as a minister on several occasions and a member of the Privy Council. Members of the Tokugawa clan, too, took up government posts, although not major ones. Yoshinobu’s brother Akitake, became a governor of Mito and worked for the Hokkaidô Colonization Board. Yoshinobu’s adopted heir Iesatso became governor of Shizuoka and, from 1903 to 1933, president of the House of Peers, while Iesato’s eldest son Iemasa became a diplomat. Even Yoshinobu himself received the highest rank in the new peerage, and one newspaper poll even identified him as an ideal choice for prime minister. If Yoshinobu had wished to participate actively in the efforts to renew Japan, he could surely have found a way to do so. In 1897 Yoshinobu moved to Tokyo and settled in Koishikawa. In the following spring he visited the palace that had once been his own for an audience with the emperor. Various honours were bestowed on him in the following years, and his views were sought by men preparing to write about the Meiji Restauration, which by now had become history. Ôkuma Shigenobu’s was one of them. In 1904 he interviewed Yoshinobu for his edited work, Fifty Years of New Japan. According to Ôkuma, Yoshinobu realized at the time that Japan must open its doors to the West and present to the outside world a unified front:

“Deeply conscious of the urgency of the situation, I decided to restore the political power to the Emperor, and I received His Majesty’s approval, thus putting an end to our feudalism, which had lasted over six hundred and eighty years. This I did in obedience to the spirit of the secret injunctions I had received from my father, and which were due to the profound foresight of our ancestor Ieyasu.[…] The whole nation had to stand like one man and make clear wherein the real sovereign power lay; an enlightened form of government must be adopted. The Shoguante could never meet these requirements, and it was now worse than useless. On this ground I restored the power to its rightful owner, the Emperor. Fortunately, His Majesty accepted it. But at that very moment I failed to control my own vassals, and they consequently gave trouble to the new authorities. Thus, conscious of my great fault towards the Emperor and our ancestor, I gave up worldly affairs and now lead a secluded life of penitence.”

In Ôkuma’s account, Yoshinobu appears much more resolute than the careworn deposed shogun who told Sir Harry Parkes, Ernest Satow and the other foreign diplomats that he had been outmanoeuvred by the powerful lords. – But then he had thirty years to weave his own story into the success story of the emerging modern nation. When he died in 1913, the newspapers celebrated him as the hero who sacrificed his position to pave the way for the Imperial Restoration.

Even so, he has never held the same kind of place as Sakamoto Ryôma in the hearts of Japanese people. Had the last shogun died in the Restoration wars, he may well have attained the fame of a loser-hero, the kind the Japanese love; the “nobility of failure” (as Ivan Morris called his classic account of Japanese heroes) might have crowned him a tragic hero: his survival made him a mere loser.

And yet, even if we discount the embellishments in Ôkuma’s book, even if his life of leisure in Shizuoka hardly fits the image of penitential renunciation projected by his chroniclers, we could perhaps concede that he had a certain quiet dignity. Japan’s history, including the history of Meiji, is not without examples of discredited men making a comeback. Rarely, in fact, has a Japanese institution been abolished as radically as was the shogun’s office in 1868.

Giving up without a fight his exalted position as the Japan’s first man under the emperor, and relinquishing any idea of a place in the new government, the last shogun lived away from the capital for thirty years, like an actor who, once his scene is finished, leaves the stage.

Part 1: The Last Shogun and the Fall of the Tokugawa Shogunate