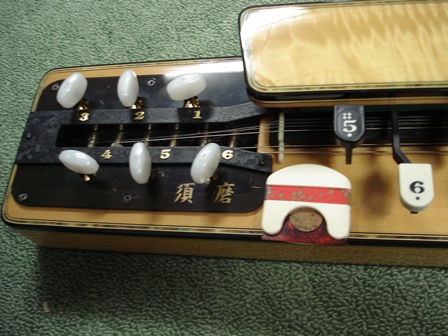 Musical instruments from Japan – Yamaha grand pianos and wind instruments come to mind, or Suzuki violins; or else traditional Japanese instruments, of which the large taiko drums and the shakuhachi flute are probably most familiar in the West. Occasionally one can also hear other instruments in Europe, such as the shamisen (a three-stringed plucked lute) and the koto (a plucked zither, usually thirteen-stringed and with movable bridges). The performers tend to be visiting artists from Japan.

Unlike Japanese-produced instruments of Western origin, instruments that originated in Japan (or at least have been played there for centuries), have not generally been adopted outside Japan. So it, might come as a bit of a surprise that an unspectacular instrument that looks like a cross between a typewriter and a simple version of the Japanese zither (koto), without the movable bridges, and in today’s Japan is mainly popular with middle-aged and elderly women, has found its way to other countries in Asia, where it has transformed and gone native.

Here is a performance of the enka classic “Tsugaru kaikyô”   (The Tsugaru Straits in Winter) that I introduced in my last blog on Sapporo songs:

The taishôgoto was invented in Nagoya by Morita Gorô in 1912, the first year of the Taishô era, hence the name. Initially sold in toyshops, it soon became popular, because it was cheap easy to play. The ‘typewriter’ keys are depressed onto the strings to produce the notes of the Western scale. The five or six strings are made of metal and produce a sound similar to that of a mandolin, an instrument popular with students at the time.  In a way, it was just the latest product in a series of musical instruments developed since the introduction of Western music in the late nineteenth century by would-be reformers dreaming of a new kind of music that combined the best of the West with the best of Japanese music, such as Shikama Totsuji from Sendai, who invented a stringed instrument called the senkakin in honour of his home town.

By the Taishô period, however, new kinds of popular music were emerging. They were not what Confucian-educated reformers had had in mind, but they did mix elements of both foreign and indigenous music. The new instrument was well-suited to the hybrid popular styles. The repertoire consists largely of popular songs, from the classic ‘Sakura, sakura’ to ‘From the Beginning til Now’ from the Korean film Winter Sonata 冬のソナタ ～最初から今まで（大正琴）

By the 1920s and early 1930s it was hugely popular among amateurs. Unsurprisingly, it also caught on in Taiwan, then a Japanese colony, and on the Chinese mainland, invaded by Japan

At around that time, 1930 or earlier  – no seems to know exactly when – the taishôgoto found its way to a few  village in Indonesia: in the Karangasem in Eastern Bali, and in the villages of Pujungan and Pupuan in Western Bali. Known locally as penting, mandolin, manorin, or norin, the taishôgoto has been modified to suit local circumstances and tastes and is, for exampl.e fully integrated into the gamelan ensemble. A Japanese researcher doing fieldwork in Pupuan was shown an instrument made by a local family in the 1930s that looks very much like a Japanese version produced for export at the time. As far as he could ascertain, the local maker copied a Japanese version brought to the village by ethnic Chinese merchants.

Here is a performance on the ‘Balinese zither’ from Karangasem: ‘Kecapi Khas Karangasem, Bali “Penting”’

And here is one (presumably) from Western Bali: ‘Gamelan Ini Nyaris Punah’

Another version of the taishôgoto is played in India, where it is known as benjo or bulbul tarang, or Indian banjo. As with Indonesia, not much is known about the introduction of the instrument. There are various reports suggesting 1915, 1927, or 1930 as possible dates – it is likely that, several people picked up a cheap instrument at some stages. One Japanese researcher learnt about a shop called Sur Saj Tarang Banjo in Mumbai and interviewed its owner, Dharmā N. Kedār, who told him that his father Nāmdev M. Kedār, a poor migrant to the city, had picked up a taishôgoto cheaply at a market in 1948. A combination of outstanding musical talent, initiative and perseverance had enabled him to master the instrument, improve it in various ways, and, eventually open a shop, which his son took over. He specializes in electric instruments, although not exclusively. This must be him:

The taishôgoto, cheap, easy to play, portable, versatile and available,  was clearly attractive to others besides the Japanese. Travelling across the seas from Japan was adopted and adapted by local communities in other parts of Asia who played their own music with it.

Research related to the Taishôgoto in Indonesia and India: